Well, it's my favorite time of year again, late summer. The kids are starting a new year of school, football has returned, baseball is approaching it's wondrous post-season, and the first is in the air. All of this signals the best thing of all, the start of the new television line-up. It's a time for us to forget the divisive politics, monster hurricanes, and impending doom of our dystopian age and completely escape from reality. Care to join me?

The good news, for starters, is that my two favorite shows from last season, The Good Place and The Exorcist are back. These two shows, one about heaven and the other about demons, are the yin-yang of the current broadcast TV landscape. Dark and light. Oceans and deserts. Sneakers and shoelaces. Donuts and coffee. You can't have one without the other, as the learned among us will tell you. One show is dark but cheesy, the other lighthearted and campy. Questions abound. Will Eleanor and Chidi figure out the heaven they live in is just a twisted version of hell? Will Angela Rance, played with finesse by Geena Davis, return to her semi-peaceful family life or be plagued further by the dark forces of the underworld? Will Fathers Ortega and Keane start charging a fee for their exorcisms in order to support themselves or find side jobs delivering pizzas or something. Tune in and be enlightened. 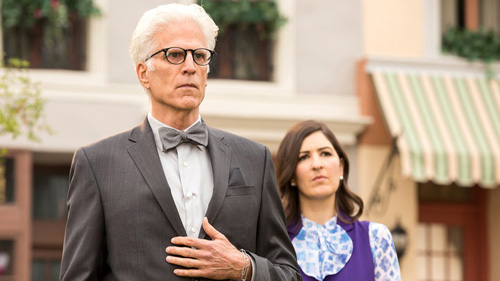 Somehow, you made it to the good place.

My research of the upcoming season has surprised and delighted me in several ways. First of all, I was stunned to learn that one of my all time favorites, Supernatural, is still airing with new episodes on the CW. I had assumed, for some reason, that it ended around season 10 or so and never bothered to check back. Turns out it is alive and well and entering lucky season 13. I'll definitely be checking in on Sam and Dean this fall, but I'm a little nervous about what state they'll be in after having faced every conceivable non-human creature and entity in existence for 12 years. I'm guessing at this phase they have permanently jumped the shark into the waters of self-parody, but that's not necessarily a bad thing. At its best, the show managed to channel Buffy's vibe of irreverent humor infused with metaphorical and metaphysical storytelling.

I was also unaware that Sleepy Hollow, although cancelled in May of this year, had lasted four seasons. I watched a couple of episodes of this in the first season and it was not the greatest, but still kind of lighthearted and fun. This series may be a candidate for future DVD viewings here in the crawlspace. Kudos, as usual, to FOX for sticking by their shows and giving them a chance. One thing that made me an enemy of NBC was their fondness for killing great shows like Siberia and 666 Park Avenue before the first seasons were even finished. I understand that you NBC executives want to see big money fast so you can continue to provide your mistresses with sports cars and luxury vacations, but that's not a great way to treat your viewers. 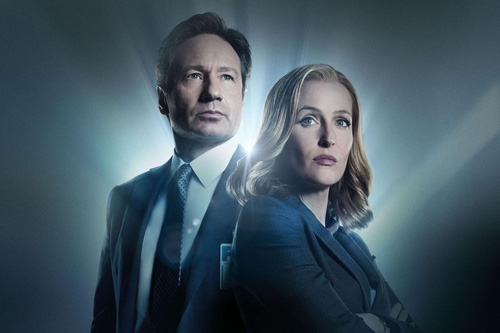 Every basement-dweller's favorite show, The X-files, is returning yet again this fall to bring joy to our hearts with all things supernatural, extraterrestrial, and conspiratorial. This time we're getting 10 episodes instead of 6, which means they've been giving the aging David Duchovny power smoothies or something for breakfast. He had been somewhat ambivalent in interviews toward doing full seasons of the show again. But this is only half a season, so he and Gillian are probably safe and won't be expiring of exhaustion any time soon. The truth is still out there!

Probably the biggest news of the season is that the classic sitcom Will and Grace, perhaps emboldened by the resurrection of The X-files, is returning with its original cast to Thursday nights on NBC. This was one of the first sitcoms to feature openly gay characters when it debuted back in 1998. Even though I'm a straight guy, the first several seasons of Will and Grace made me laugh like a drunk hyena. In later years, the humor got to be a little predictable, but I'm still looking forward to seeing this old bunch again.

Two new shows from last season that I thought I would like until I watched them are also returning. After viewing half of the first episode of 24: Legacy, I lost interest, probably because of the absence of Kiefer Sutherland, who played my close personal friend Jack Bauer in the original 24 series. Kiefer moved on to a new show, Designated Survivor, which is a 24 meets The West Wing kind of thing. Instead of working for the president, this time Sutherland gets to be the president. The premiere episode that I watched last year seemed like a promotional video for the Washington political establishment, and was somewhat lacking in the cloak-and-dagger edginess that made 24 so great. It just honestly left a bad taste in my mouth, but I'll probably give both of these shows another shot because you can't always judge a show by the pilot episode.

With all the great returning shows, there's not much room in my schedule for watching new ones. Thankfully, there's only a small handful of newbies that interest me this time around, including:

The Orville - The first episode of this live action sci-fi parody is about what you would expect from producer Seth McFarlane (who also plays the lead role of starship captain), except that he holds his bawdy tendencies in check a little more than in his cartoon shows, making The Orville almost appropriate viewing for the whole family. But not quite. As always, McFarlane's saving grace is the merciless socio-political commentary that he blends into all of his shows.

Ghosted - Another FOX comedy about two paranormal investigators, played by Craig Robinson (of The Office) and Adam Scott (of Parks and Recreation). Hopefully the greatness of their former sitcoms will be transfused into this new show. Ghosts and humor sounds like a winning formula to me. It certainly worked for the Ghostbusters movies.

The Gifted - As you can see, FOX seems to have all the shows I want to watch these days. This one, loosely connected to Marvel's X-Men franchise, is about a family of mutants with superpowers. The premise seems derivative of Heroes, but then again the X-Men came first, so this is kind of like if Rick James made a comeback rap album after MC Hammer sampled his classic tune "Superfreak." Except in this case Rick James is a huge media corporation.

Kevin (Probably) Saves the World - Last season gave us Kevin Can Wait, the new sitcom with Kevin James (from King of Queens) that I still intend to watch when I get a chance. Now he is joined in TV-land by this other Kevin who is on a mission from God to save the world in this ABC dramedy. What does this duplicity of Kevins signify, exactly? Is it an omen of some kind? Most importantly, will he save the world or wait until later? Consult your astrologer.