Today I was rather bored, so I scrounged around my bookshelves at home looking for something to read that I'd never gone through before. I found Jules Verne's short novel "From the Earth to the Moon," written in the late nineteenth century shortly after the end of the American Civil War. I had heard a bit about it over the years, and recalled that it was considered to be a curiously prescient piece of literature, since less than one hundred years from its initial publication, we had actually managed to land men on the moon. Verne had the general idea, but was only off the mark in regards to the specific details.

I'd like to spend a moment dwelling on those flubbed details. Verne thought that we might pack a couple of men into a hollow cylindrical aluminum projectile the size of an efficiency apartment in New York City, and place that projectile at the bottom of a 900-foot-long cast-iron cannon barrel pointing directly up at the sky. Behind the projectile, Verne would put half a million pounds of explosive material, and the cannon itself would be completely buried underground except for its muzzle, which would be level with the surface. In the story, the gargantuan cannon was fired off, and the men inside were shot up into orbit around the moon.

We can commend Verne for his remarkable imagination and foresight with regard to the imminent conquest of the lunar surface, but in the story itself we see an error common to all futuristic dreamers, which is that they tend to develop their prophetic visions based upon the known means of the era in which they live.

At the time "From Earth to the Moon" was written, we were missing a number of technologies that we take for granted today, such as widespread telephone service, wireless transmission of information, airplanes, computers, and perhaps most importantly, rockets. Tellingly, none of these technological innovations are present in Verne's story. In fact, truth be told, Verne does not envision a single technological innovation. Rather, he considers existing technology -- in this particular case, that of heavy artillery -- and proposes stretching, expanding, and extending it to preposterous and utterly unworkable dimensions. With hindsight, we can see that the solution did not lie in increasing the scale of existing technology in order to attain the proposed goal, but instead in approaching the problem from an entirely different and hitherto unsuspected angle. 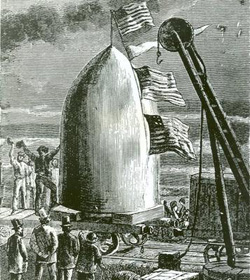 Sadly, it appears that even today, our best scientists and thinkers continue to make the same mistakes in imagining the future as Verne himself made in his epoch. Let's consider some of the ideas floating around nowadays about how we might take humans to other worlds. We've already made it to the moon in one of our rockets, so it is of course natural to think that we might put humans on Mars with similar technology. Mars is indeed considerably further away from Earth than the moon is, but in any case the general consensus that is emerging is that a manned trip there is quite do-able using the technology and resources available to us today. Admittedly, it will be a challenging, problematic, and extremely expensive trip should we do it as currently envisioned, and it could very well end in disaster and death for those on board, but again, it appears that we can potentially do it.

Our imagination and vision are reasonably well within practical limits when discussing a personal visit to Mars. However, once we begin to contemplate human voyages beyond that planet, things get a bit more sketchy; and when we start thinking about manned travels to other star systems, I think it fair to say that we are just like Jules Verne postulating the use of a giant cannon to put men on the moon. Quite frankly, most of our supposedly best ideas on the matter are simply impracticable and cannot be carried out.

Clearly, the biggest hurdles to interstellar travel are the unimaginable distances involved, and the very limited span of an individual human life. So, some of today's most respected scientific thinkers have proposed solutions that involve getting humans to travel almost as fast as the speed of light. One idea that has gained a lot of attention lately is that of the ram jet, which would be a massive structure, perhaps several miles across, which would essentially be a huge funnel facing in the direction in which the craft itself might be travelling. The idea is that tiny particles of hydrogen gas trapped in the funnel would be sent to a fusion engine, which would receive the hydrogen and draw energy from it, thus propelling the craft forward even faster, and therefore bringing in potentially more hydrogen, etc. The ram jet would in this way continue to accelerate to progressively greater speeds, until it might finally approach the speed of light, but not exceed it, since according to the laws of physics this would be impossible, Star Trek episodes notwithstanding. With this kind of functional ram jet, humans might reach a nearby star like Alpha Centauri within the span of a human lifetime, although such a journey might theoretically take several decades.

The ram-jet concept is highly problematic for a number of reasons. Firstly, at such enormous speeds, it would be essentially impossible to avoid small meteors that could destroy the craft, or for that matter a steady procession of tiny meteors that over time would render it useless. Space is indeed for the most part an empty vacuum, but there is some small debris scattered around in it, and this infinitesimal sprinkling of matter assumes much greater significance at near-light speeds, since so much distance is covered in so short a span of time. Secondly, at some point during the journey, it would be necessary to begin braking maneuvers; how this might be done is not certain, and even if a sure method were found, one would have to take into account when and how the braking should be applied, and how much more time such maneuvers would add to the total journey. Thirdly, as currently imagined, the ram jet would have a glacial pace of acceleration to near-light speed, taking as much as twenty years or more to achieve it. Fourthly, due to the long periods of time involved in making such a ram jet journey, provisions would have to made for creating a self-sustaining biosphere upon the ship, and in general for meeting the diverse and complex needs of a human crew for decades.

One key argument in favor of near-light speed travel on craft such as ram jets is that the apparent procession of time slows considerably for those on board, so that while those of us on earth might perceive an interstellar journey of 100 years, those on board may only age 50 years or less. Carl Sagan himself even proposed sending around the visible universe a near-light-speed craft, which, according to him, could circumnavigate it in only 30 or so apparent years, assuming that it quickly attained near-light-speed velocity. Of course, the actual transit of such a craft, from the perspective of those of us on earth, would take millions if not billions of years, so that those returning travelers would find an earth vastly different from the one they had left behind-their valuable acquisition of knowledge on distant stars might be returned to a planet no longer inhabited by human beings.

Such voyages leave a lot to be desired. No, what we must have is a way to quickly travel to distant stars and return from them rapidly, so that what we learn and experience on such worlds might be readily shared with our fellow humans back on earth. And this cannot be done by travelling in ships at near-light speed. The speed of light itself, assuming that it is a universal absolute, or rather, as physics postulates, a speed limit that cannot be surpassed, is itself a formidable barrier to interstellar exploration. For even if we were able to construct ships that could almost instantaneously achieve near-light velocity, these would of necessity have to undertake journeys lasting a not insignificant span of years. Within five or fewer light-years from our sun, there is only a mere sprinkling of stars, and within ten, twenty, and thirty years, not all that many more. Granted, there are enough of these fairly close stars to keep us occupied for quite some time, but when compared to the nearly infinite number of star systems contained within the visible cosmos, our nearest stars only represent a few dozen grains of sand in an entire desert.

In my view, the primary practical goals of functional interstellar space travel should be the following:

One idea that has been floated around-and that currently has little if any credibility in the scientific community-is that there might be some way to electronically scan a human body here on earth, and then assemble an exact duplicate copy of that same body at some unimaginably distant point. Somehow, this transmission of biological information would be sent and received instantaneously, that is, without any regard for the speed of light itself. This same method of instantaneous transmission could also be applied for interstellar communications.

As far as the specific details go, I'm probably flubbing here just as badly as Jules Verne did in the nineteenth century. But perhaps like him, I've got the general idea.