In "Comments on Interstellar Space Travel Part 1," I explained the undeniable practical need for developing a method for transporting human bodies to distant stars at speeds exceeding that of light, and of devising a means for communicating bi-directionally from earth to those distant stars, so that messages are both transmitted and received instantly -- thus, also well beyond light speed.

As I mentioned previously, as we currently understand it, the science of physics postulates that the speed of light cannot be exceeded. It is said that in order to propel an object forward at a faster speed, a proportionately greater amount of thrust energy is needed. All of us understand this perfectly well on an intuitive level, since when we wish to run harder, we must expel more effort, when we want to drive faster, we must get the car's engine burning more fuel, and when we desire to ride our bike at a greater velocity, we must push the pedals at a greater number of repetitions per minute.

Now, it is explained that the amount of energy needed to obtain greater velocities, increases at an exponential rate. Roughly and rather inexactly speaking, this means that in order to go twice as fast, you must give forth about four times the energy; and in order to go twice as fast as that, you must give forth around sixteen times the energy, and so on. This may not sound like all that big of a deal, but once the speeds get enormous, the amount of energy needed to achieve such velocities becomes, well, quite outrageous, to say the least. Actually, physics postulates that in order to propel an object with mass at light speed, an infinite amount of energy would be needed. Thus, scientists tend to limit themselves to speaking of obtaining near-light-speed velocities, since they assume that a literally infinite amount of energy cannot be used to propel an object forward.

As I mentioned earlier, as I see it, this means that traditional ideas about travelling to other star systems, such as by some form of conventional physical propulsion, are ultimately impractical. Too much time would be required to make such journeys. Also, communication back and forth from earth, even from our nearest star, would be a hopeless exercise, since the light-speed transmission of each signal would take years.

Alien beings that surpass us in intelligence and technology -- and in my view, odds are fairly overwhelming that they exist -- have undoubtedly found means for overcoming the light-speed barrier, both with regard to travel and communication. However, by saying this, I do not mean that they have found a way to literally travel faster than the speed of light.

For example, let's look back to the days when humans were first beginning to really seriously explore the idea of human flight. Our models were birds, so quite naturally we devised huge, ungainly flapping wings for ourselves, which not surprisingly were dismal failures. The fruitlessness of that approach was so evident and overwhelming, that for centuries the quest for flight was deemed as utterly hopeless. However, the conundrum was solved by abandoning the idea of having flapping wings, and replacing it with the novel invention of fixed wings propelled forward by another source, in this case a spinning blade.

Rather, we should think of how we might start at point A and then appear at point B in less time than it would take light to do the same thing. And in such an example, we are not running alongside a beam of light and then somehow moving ahead of it. Instead, some other means of arriving faster at our destination is devised.

Admittedly, some serious thinking has been given to the subject of faster-than-light travel, as seen in the following Wikipedia article:

If you read this article, you can see that a copious number of ideas on the matter have been advanced and investigated, with some having been more researched than others. However, besides the evident fact that those proposals reject the illogical and impossible notion of using more than an infinite amount of thrust energy to attain faster-than-light speeds, what they all have in common is any number of practical or theoretical problems that, as such, would render their full application thoroughly unworkable. In any case, it is a start, and perhaps one or more of those ideas -- God only knows which one -- might form the conceptual germ from which a workable strategy might eventually emerge. Despite the clear imperfection of those theories as they are presently formulated, they still amount to worthy efforts to think outside the box -- please pardon the tired cliché.

As referred to earlier, we undeniably need instantaneous communication with any part of the universe, and this is impossible at the mere speed of light. The light that we see coming from distant stars may only be ghost light -- those stars may no longer exist, having blown up in supernovae explosions eons ago. Also, we may see at a certain angle a star at a distance of 10,000 light years, but its true current position is going to be several degrees away from that, since in the intervening time it has moved a great deal through space. In other words, the universe as we see it is not exactly the universe as it is, but rather, the universe as it once was. Therefore, we also need a means by which we may properly perceive the universe as it presently exists, and in order to do this, we must find some way to extend our vision outward well beyond the speed of light. 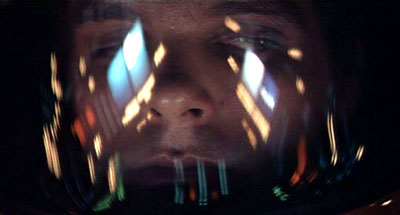 The importance of this faster-than-light extension of our vision and communication capabilities cannot be underestimated. For, if we develop the means to effectively transport tangible mass from A to B at speeds exceeding that of light -- especially if we become able to traverse, for example, 10,000 light-years in a single instant -- we must know what will be there at the moment we arrive. Suppose we were to miscalculate somewhat our trajectory. We might end up on the outer fringes of the solar system we had aimed for, or, more tragically perhaps, we could find ourselves uncomfortably close to a star and be instantly burnt to cinders. But assuming that all goes well with the interstellar leap, we need a way to immediately get information back to earth.

Again, I offer no specific ideas about how any of these challenging technical objectives might be attained. I simply outline the goals, farfetched as they might seem at this point. That said, I suspect that the answer to faster-than-light travel lies, at least partially if not completely, with the eventual formulation of a general theory of relativity -- the one that Einstein struggled to postulate during his lifetime, and that would further clarify the essential relationships between mass, energy, time, gravity, electromagnetism, and space -- as well as with further discoveries regarding the structure and nature of sub-atomic particles, such as those currently being realized at the Large Hadron Collider on the border of France and Switzerland. Once we gain sufficient knowledge in these areas, it may be enough to make interstellar communication and travel a practical and attainable quest.

And may I emphasize here that these are not frivolous goals. Let us take a moment to contemplate our development and evolution as human beings upon the face of this planet. We began as dwellers of tiny and nomadic encampments that spread outward across the globe over a very long span of time, not always gradually, but quite probably in sporadic and epic bursts of exploration and settlement. Then, when Christopher Columbus first arrived on the outskirts of the American continents, the eastward expansion of human migration -- begun thousands of years earlier -- finally and definitively touched an incipient and tentative westward expansion across a threatening ocean, and the foundations of a truly global consciousness were laid. Only a handful of centuries later -- a mere blip in time in comparison with the entirety of humankind's few millions of years of existence -- we found ourselves upon the surface of the moon, and today we are poring over plans for visiting Mars.

With all of the breathtaking exploration that has taken place since Columbus, and in only the span of a few dozen generations, are we now to shrug our shoulders and resign ourselves to never sending human beings to other star systems? Such an attitude goes against the natural and expected trajectory of our continuing advancement as intelligent and inquisitive beings. The difficulty involved in solving a challenging problem does not preclude our eventual capacity to do so.

We instinctively understand that there are countless wonders to discover and behold, personally and at very close range, out there in the vast reaches of the cosmos. It is our destiny to accomplish this goal, and to likewise one day form part of a much larger and greater commonwealth of intelligent beings throughout the universe.

I cannot deny the possibility that we are being monitored by alien beings, that our planet has been assigned some kind of categorical designation by some creatures of superior intelligence -- something like Planet 3E, System 13-AB, Sector Z-222, Region NT-234, Galaxy AG-1233, etc. -- that carefully dart through our atmosphere, surge forward beneath our waters, and at times orbit our globe. There is no conclusive evidence for this, however; at least, there is no conclusive evidence available to the general public.

But if such alien beings might openly contact us, and take it upon themselves to show us how to traverse interstellar distances more rapidly than the speed of light, we might finally slake our terrible thirst for knowing what is to be found beyond the reaches of our own solar system.

Then again, maybe, for some reason lying within the realm of their inscrutable wisdom, such aliens prefer to allow us to figure out these things for ourselves. Perhaps we are not ready for that kind of knowledge just yet -- let us not forget how dangerous and unstable we have become with recently-discovered nuclear technology. If an astounding power and technological method were suddenly revealed to us, would we have the maturity to use it properly, or would we misappropriate it to our own detriment or possibly cause our own annihilation? I do not wish to be the pessimist here, but I suspect that the latter would be the case should something like this occur today. I think that when we have sufficiently matured as a species, we will have mastered the necessary methods for realizing practical interstellar travel. Sadly, such a time may be many generations into the future.