I'm in a TV State of Mind

Spring is here and the concluding 2011-2012 network TV season has turned out to be one of the better ones in memory. Here's my take on some of the shows of the previous year:

You may remember my rants about the DTV transition, which caused me to miss the last season of Lost because I couldn't pick up ABC anymore. That was not a good situation for a TV blogger to be in, but luckily my local ABC affiliate has since boosted their signal enough that I can now pick up their nebulous station.

As a result, I discovered The River, which became my favorite show of the season. It's sort of a cross between Lost, Blair Witch Project, and the Paranormal Activity movies. Set in the exotic locale of the Amazon jungle, The River really delivers the goods in terms of what makes for quality television: evil spirits, monsters, ghosts, conspiracies, native folklore, and even a demonic possession or two for good measure. 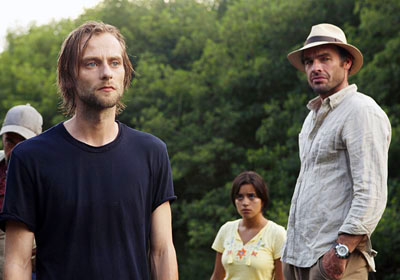 Admittedly, the premise of the show -- a group of people on a boat navigating their way through a maze of rivers and fighting off various supernatural entities -- seems a little too much like a video game. The River generally seeks to entertain without burdening its viewers with symbolism or deeper meanings. It dispenses with reality almost to the point of campiness at times, but that, for me, is usually more of a reason to watch than to change the channel.

I was surprised to read that this show hasn't done too well in the ratings, and ABC was rumored to be in talks to sell the show to a cable network. In short, the future of this show's not looking too good for those of us with only over-the-air channels.

Sarah Michelle Gellar's double reincarnation on her native CW network has been better than I expected. Ringer just finished up its first season with a fan-pleasing ending that tied up most of the loose ends, and provides a clean slate for the start of the next season, assuming there is one. The show's ratings haven't been the greatest, but they got a big boost for the season finale, which is encouraging news.

Now that the dual murder plots against the twins have been resolved, we will undoubtedly see more of a direct confrontation between the sisters, Bridget and Siobhan (pronounced "shi-bahn"), in future episodes, perhaps battling it out for the allegiance of their mutual husband, Andrew Martin.

This mystery drama gets to be a lot like a soap opera at times, but have I found myself watching every episode in spite of the obviously female target demographic. The show might have fallen flat with a lesser actress in the starring role, but Gellar's wit and energy has helped to keep this show interesting.

(Checking my notes, scribbled on a little piece of paper.)

Another thing I like about Ringer is the music. CW's habit of playing snippets of contemporary pop songs during their shows usually annoys me, but song choices on Ringer avoid the usual melodramatic route in favor of alterno-indie fare that has, on more than one occasion, sent me wandering off to the CW website to find out what the heck I was listening to.

Another interesting new show, which started mid-season, is the highly ambitious sci-fi-esque drama Touch by Heroes creator Tim Kring. The show follows the story of single father Martin Bohm and his mute, seemingly autistic son, Jake. The actor who plays Martin, a Kiefer something, looks a bit like 24's Jack Bauer.

The son, Jake, has a habit of writing down pages of repetitive numbers, which seem to manifest themselves as signposts in the lives of random people, who are brought together in various beneficial and tear-jerking ways. "Aha!" you say. "It's the old numerology-and-clairvoyance-masquerading-as-physics routine." Apparently, it is Jake's heavenly-designated task to make sure that these various characters connect with each other for their mutual benefit, resulting in bucketfuls of sunshine and rainbows and happily-ever-afters.

As with Heroes, there are a lot of things I like about this show, and also some things I don't like. The most annoying of the latter -- I hate to say it -- is the eleven-year-old son Jake. Not only does he refuse to talk, he throws a fit whenever he is touched by another person. Also, he likes to wander off by himself and doesn't respond to anything his father says to him. Dad spends most of the show on a wild goose chase, running after his son yelling "Jake! Jake! Where are you going Jake?" Somebody needs to call Nanny 911, and fast.

Even more nerve-grating are the kid's pompous monologues that start and end the show, meant to impart deep wisdom to us, the unwashed viewers. It is unclear in these moments whether we are hearing Jake's thoughts or if he periodically sneaks off with a tape recorder while no one's looking, as if to say, "Ha, ha, the joke's on you! You thought I was mute, but it turns out I'm just a brat!"

This is a show in dire need of a villain. My suggestion would be this: since the kid has already assumed the role of villain in my life, why not let him be Officially Evil on the show too? Give him telekinetic powers in addition to his clairvoyant ability, and maybe he could use his knack with numbers to create chaos and confusion instead of Hallmark card moments. Then bring back a few super-powered characters from Heroes to teach the wayward tyke some important life lessons.

The whole Touch experience feels a little bit like Josh Whedon's Dollhouse, another show that I tried hard to like and stuck with for the duration of its short life. Except with smiley faces instead of brooding post-apocalyptic irony. When I contemplate the future of this show, the cosmic number receiver in my gourde keeps saying 86. That's not good, unless it refers to the number of episodes that will be aired.

Fringe is still hanging in there after four years on FOX, but the ratings this season have hit rock bottom. Still somewhat of a confusing mess with the alternate timelines and what not, it remains one of the better shows on television.

I think I've finally put my finger on what's holding this series back: it relies too much on the stand-alone stories and has become too predictable, too much like a police procedural drama. I would like to see Fringe as a true serial drama with one long never-ending story arc. Then, instead of staying bogged down in the lab, let the setting change on a regular basis and don't anchor the show to any specific location. I know that's a lot to ask, but there it is. A new direction for the series might be just what it needs to boost its viewership again.

I started out making fun of this show, but ended up liking it a lot. Having an army of executive producers turned out to be an effective strategy. The dinosaurs, thankfully, were not the central focus of the series, but more like part of the scenery. The real theme of the show was the power struggle that goes on in a small developing community and the ways people learn to co-operate for their common good. Like so many great network sci-fi shows of the past, it now appears that Terra Nova has been cancelled after one season.

This old standby of the CW network was less interesting without the Cass and Bobby characters this season. Luckily, both have rematerialized in the later episodes in slightly altered forms -- Bobby as a ghost, and Cass unable to remember that he's an angel. I have a feeling this show has yet another slam-bang season finale in store for us.

I checked out this show's Facebook page early in the season and found a lot of predictable "This show sucks without Steve Carell" type comments. Personally, I think the quality of the show has stayed pretty high this season, except for a couple of weak episodes like the one where Andy gets a butt tattoo as a gimmick to boost the morale of the sales team. That episode was so bad I went online to find out who wrote it. Turned out that it was Paul Lieberstein, the guy who plays Toby. Hmmm, maybe we shouldn't be letting the actors write the show? Just a thought. 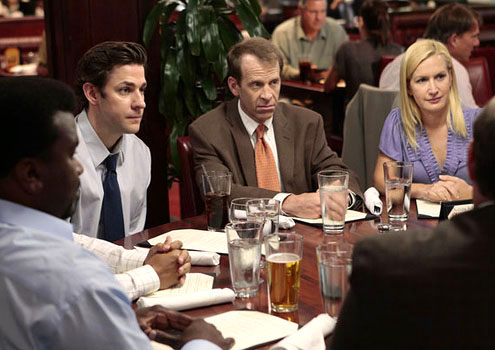 Otherwise, The Office has stayed entertaining and has not yet devolved into the kind of unbridled childish stupidness that afflicts certain other NBC sitcoms. This is probably due to the continued involvement of Ricky Gervais and Stephen Merchant, the producers of the original British version of the show.

Another excellent sitcom that NBC has still not found a way to screw up. Leslie Knope has taken leave from the Parks and Rec Board to run for Mayor of Pawnee, and it will be interesting to see what happens now that Mr. Swanson had appointed the icy April as a Knope's unlikely temporary replacement. Undoubtedly, many enquiries into P&R issues will be met with a cold stare and a distant, apathetic attitude.

Well, that wraps up my review of shows I watched last season. To be honest, I'm kind of glad that summertime is approaching so I can ease up on the television and get out and see the sun and maybe read a couple of books.

There is never a shortage of people in my life to remind me that all this watching of TV is a waste of time. They say that life is short, and should be spent doing things like climbing mountains, attending wine tastings, or memorizing the value of pi to a hundred decimals. What they don't understand is that television is more than a time-wasting device for me. After putting in almost 50 hours a week at the local convenience store, I need a way to relax. When I get home in the morning after one of my grueling all-night shifts spent ringing up people's cigarettes and energy drinks, nothing helps relieve the stress better than popping in a videotape of one of my favorite shows.

The TV world, in my opinion, is far superior to the real one. Everything there is interesting and nicely scripted -- well, at least in the good shows. The people are quick-witted, sharply dressed, and usually know the right thing to do in every situation. There are no problems that can't be resolved, no scenarios that are too far-fetched, no laws of physics that can't be broken. That's the universe I want to live in.

Recently it occurred to me that I might somehow live to be pretty old. Hopefully by then I won't be living in Mom's basement anymore. Not that it bothers me to be living here at age 38. I happened to have been blessed with a cool Mom. Times have been tough and she understands that, plus I'm sure she appreciates the yard work I do in addition to the $150 in rent I pay her every month. If it ain't broken, don't fix it.

What was I saying? Oh yeah, I was saying that one day I would be old and hobbling around with a cane and I would think back on what I had achieved in my life. Would I regret the fact that I had spent all of my years on the couch in front of the tube and writing a blog about it? Would I think that my life had been wasted? No way, people. This is what I was born for and I wouldn't trade it for anything.