The DTV Nightmare Part IV: In spite of the umpteen public service announcements that promised all I had to do was hook up a digital converter box and my TV viewing would not be affected in the slightest by the digital television transition, I discovered after the switch that I was unable to receive my local ABC affiliate -- in spite of buying two different antennas for that purpose -- and was unable to watch the final season of Lost. Not the biggest surprise of my life. It's OK, I'll just pick up Lost on DVD. That show's definitely worth owning. I've already started to accept the fact that this could the beginning of the end of free over-the-air television, thanks to the greedy telecom companies wanting to usurp all the extra bandwidth, and I could eventually be forced to pay for cable or satellite television for the first time in my life. Honestly, the thought of paying a monthly fee for TV makes my stomach turn, but I guess I'll just cross that bridge when I get to it. I may have to change the name of my blog to Book Wormhole. God knows, I have plenty of books to read.

So maybe the fact that one of the major networks is out of my life for the foreseeable future accounted for the lack of things to watch on TV this summer. Although, that seems unlikely, since Lost is the only show I can remember watching on ABC since The Six Million Dollar Man. I guess part of the problem is I'm finally getting tired of some of the summer reality junk that used to amuse me on occasion. I once again elected to miss the circus of stupidity called Big Brother, and sidestepped the parade of wasted lives known as America's Got Talent. I chose to opt out of Chef Ramsey's masochistic cooking school for a second season in a row, maybe I'll be bored enough to watch him next time Hell's Kitchen rolls around, and yes, there will be a next time. There's always a next time for these abusive British types.

Supernatural reruns: This CW show has been pretty amazing for the last couple of seasons in spite of the fact that I never particularly liked the Winchester brothers. Their melodramatic bickering and overwrought machismo are still annoying at times, but the show consistently delivers interesting, well written stories, with witty dialogue reminiscent of Buffy in her heyday (but don't tell Dean I said that). 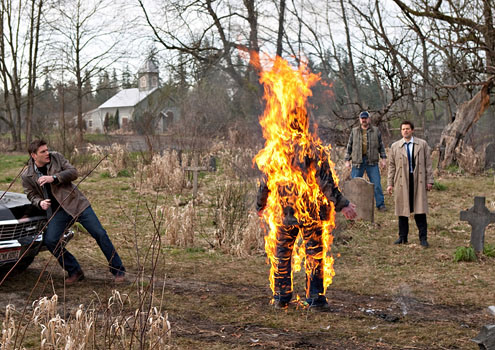 Need To Know: I tuned in to the new PBS public affairs program, needing to know if the show was a worthy replacement for the recently ended Bill Moyers' Journal. It's not a bad program, but they seem to take more of an apologist stance on American foreign policy than I would have hoped for. In other words, more of the same warmed over middle-of-the-road opinions you can hear anywhere else. Well, we can look on the bright side. Maybe the talk radio Nazis will quit calling PBS liberal now that Moyers is gone. Of course, they would have to actually watch the network to figure that out, which seems unlikely.

Ghost Story / Circle of Fear: Lucky for me, I have a small stockpile of DVDs of favorite TV shows from the past. These are a real lifesaver at times when there's nothing on but infomercials or court shows. Receiving top billing here in the crawlspace this summer was an old childhood favorite, which had never been officially released on DVD, but I was enthused to find it for sale as a bootleg. It was a supernatural-themed anthology show (meaning that each episode was a stand-alone story with a different set of characters) called Ghost Story, which was renamed Circle of Fear in its second and final season. The program is very similar in style to Rod Serling's Night Gallery. This show originally aired in the early 70s, but I discovered through reruns in the 80s. The passing decades have only made it more appealing -- the old cars, the clothes, the psychedelic music and directing style all add up to a nostalgia high for this aging potato. Plus, Sebastian Cabot adds a touch of class as a mysterious innkeeper who introduces each episode.

Hangin' out with my Friends: Other shows in my DVD player recently included the first seasons of X-Files, ER, and Friends. You might not believe this, but I was actually going through an extended "I don't watch TV" phase back in the 90s when the early seasons of these shows where on. But I fell off the wagon hard in 1996 when I discovered them, along with Buffy the Vampire Slayer and Seinfeld. That was the year I became a TV fanatic. I couldn't believe how much good stuff was on, and so happily rejoined the ranks of the low-brow and unrefined. My renewed friendship with the glowing box has gone on for 14 years now.

So sue me. I'm sure you anti-TV snobs that read that last paragraph will recognize me as a traitor to your cause, and call for an immediate intervention on my behalf. No doubt, you'll have me sent to a TV watchers' rehabilitation center somewhere, where my treatment will consist of a rigid daily regimen of life affirming get-em-off-the-couch activities, including skydiving, bungee jumping, horseback riding, cake decorating, metallurgy, tightrope walking, bee keeping, long distance swimming, marble sculpting, barehand tree climbing, helicopter piloting, CPR classes, square dancing, jazzercise, tennis, karate, taekwondo, tai chi, feng shui, and advanced survivalist training. Evening hours will be dedicated to group therapy and the speed reading of great literary classics. Concurrent with these activities, I'm guessing, will be daily deprogramming sessions involving the use of psychoactive medications and the forced viewing of Clockwork Orange-style propaganda videos. At the end of my 60 day stay I will roll my eyes at any suggestion of watching TV, and join the ranks of the sweater-wearing latte sippers at my local trendy bookstore.