The Office Enters a New Era

I should probably have something insightful to say about Steve Carell's departure from The Office, but the inspiration hotline in my brain only gives me a dialtone, followed by "If you'd like to make a call, please hang up and try again." Honestly, I don't care about this show like I used to, but I guess it still beats the other sitcoms in NBC's smug little Thursday night line-up, with the possible exception of Parks and Recreation, which is pretty awesome most of the time.

In the last episodes of the season, Carell's character Michael Scott decided to move to Colorado to be with his true love, Holly Flax. I made it clear in a previous post that I thought these two were a mismatch. You have to wonder how long a relationship can last that's based solely on a mutual love of doing Yoda and ET impersonations. A man-child like Michael Scott needs a level-headed woman like Jan to keep him out of trouble, not a fellow child. If Michael and Holly were real live people, I'd bet my money that their romance would end with lots of blood, broken glass, and used syringes. However, conventional wisdom among Office fans not only begs to differ, it screams that these two are soul mates. So, I'll leave it at that. 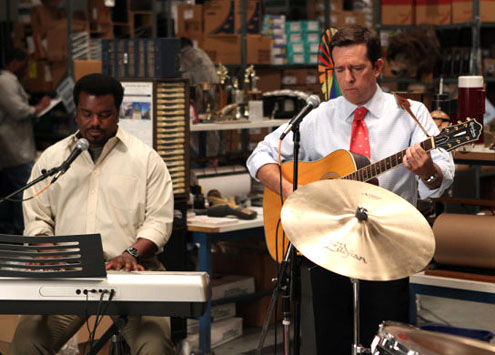 Darryl and Andy playing a tune

With Michael Scott gone, it seems certain there will be more focus on Jim and Pam than we've seen in recent seasons. In a post a couple of years ago, I falsely predicted that Jim and Pam's relationship was headed straight off a cliff. My reason for saying this was based on my perception that happy relationships on television are as elusive as the Road Runner, always leaving the hard-broken participants laying at the bottom of the canyon wondering what happened before the anvils drop on their heads.

What I didn't see at the time was that Jim and Pam are no ordinary characters. They are the perfect people, sent down from heaven to slum in the quaint setting of Scranton, PA. Such individuals are not subject to the regular laws of television relationships. A normal TV couple pursues activities such as arguing, sleeping around, staying drunk, and vandalizing each other's property. Jim and Pam seem impervious to any such turmoil. They remain calm and cool at all times. To expect anything to disrupt their world is futile, because their whole reason for existence is to make the rest of us feel insignificant.

That being said, I should admit that I actually like Jim and Pam, and wish them all the best, and hope that one day I'll be invited to one of their barbeques. Or maybe at least I'll get a Christmas card or something. Nah, who am I kidding? I'm a thirty-seven-year-old college dropout who works at a convenience store. I sort of missed the boat on the whole yuppie lifestyle.

So the big question now is: What does the future hold for The Office? Will it die after a couple of seasons or will it go on for seven more? That's a long time for any show to be around, but I'm not giving up on it just yet. We've still got Andy and his bright colored pants, and whatever romantic blunders the future has in store for him. We've still got Erin's lovable ditsiness. We've still got Dwight the sullen schemer with his unchanging ugly suit. We also need to stick around to see if Angela finds out what's up with her reportedly gay senator boyfriend. And of course, a lot of us will be tuning in to see who the new boss will be. Based on the parade of big names who appeared on the show as Mr. Scott's potential replacement -- including Will Ferrell, Ricky Gervais, Ray Romano, Will Arnett, and Jim Carrey -- it's clear that NBC plans to keep this show around for a while.