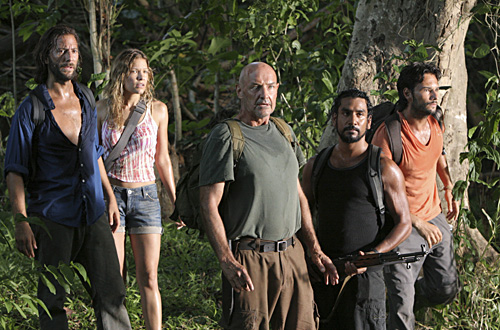 In the previous installment I decided it would be a clever idea to visit Lost Island in order to find answers about the mysterious show on ABC. I hitched a ride to the island on a freighter ship, and managed to assimilate myself into the Lost beach community without much trouble.

After a couple of weeks of attempting to pick the brains of the series regulars with questions about the ghostly apparitions, the hatch, the four toed statue, the whispering voices, and countless other phenomena on the show, they began to tire of my incessant badgering. One day, while I was talking to Juliet, Jack clapped me on the shoulder and said, "Look, Junior (as he had taken to calling me), we don't know the answers any more than you do. If you really want to learn something you need to go visit the Others' camp." To which I replied, "Wouldn't that be kind of dangerous?" He smiled. "Nah. You'll be OK."

It seemed like a risky proposition, but the next night I was compelled into action. I had joined several of my fellow islanders who were conversing around a campfire. I noticed Charlie sitting on the other side. "Are you the real Charlie or ghost Charlie?" I said half jokingly. He gave me a glare. "Just as real as you, mate." To prove his corporality, Charlie picked up his guitar and launched into a never ending rendition of "You All Everybody", in the style of "99 Bottles of Beer". After Hurley and a drunken Sayid joined in people started to get up and leave. Then suddenly everybody was gone. Not just the people, but the whole camp site too, including the bag of Dharma marshmallows I had been contemplating. Apparently I had gotten a demonstration of the islands new annoying time-spaz feature.

After unsuccessfully looking around for a few minutes for clues of my when-abouts, I sat down in the sand and began to consider my options. I looked out at the dark ocean and didn't see any lights from nearby ships. It began to sink in that I had gotten myself stuck here for the unforeseeable future. I decided the next morning I would take Jack's advice and head for the Others' camp. I would find Ben or Richard, and hopefully one of them would point me in the right direction. Luckily I still had my backpack with me, which had been sitting next to me when the timeshift occurred. It contained my notebook, some snacks, a compass, and some other helpful survival items.

In the morning I set out on my journey through the woods. It wasn't long before I encountered Desmond again, and I was relieved to see that somebody else was still on the island. This time he had fashioned himself a loin cloth out of scrap boar hide. He ran after me frantically, yelling "You're gun tah die, Crawlspace!" I asked him what the hell he was talking about. He handed me a religious brochure explaining how I could gain eternal life by joining his new nature-based religion. I thanked him for the information, and promised to return later to discuss what I had read. After I resumed my hike, it occurred to me that I should have mentioned to Dez that his long lost girlfriend Penny might be on her way to the island and that he should get himself cleaned up a little bit.

A couple of hours of later I stopped to drink some water from my canteen and munch on some dried mango. Suddenly everything went dark and there was a strong gust of wind that knocked me off the rock I was sitting on. At first I suspected another time shift, but when I looked up I realized that the infamous smoke monster had found me. I grabbed my gear and started to run, but the dark cloud knocked me down and started to drag me by my feet. I kicked my way free, then picked up the largest rock I could find and hurled it at the thing. The rock went through the middle of the cloud and bounced on the ground behind it. A big toothy grin appeared where the rock went through and the smoke monster started to laugh. "You're not too bright, are you?" he said.