After five seasons, the Office remains in rock solid condition, and continues to raise the bar on what can be achieved within the sitcom format. It combines edgy slapstick comedy with intelligent, meaningful writing. The characters are complex, and I can relate to every one of them on some level. Aside from a few minor flaws, the show remains on track toward profitability.

The writers seemed to have put Jim and Pam on autopilot, with their relationship in a presumably happy but uneventful state. They are shacked up in Jim's parents' old house and the date of their wedding remains uncertain. One episode seemed to experiment with the possibility of having them become enemies (new copier vs. office chairs), which I found to be delightful, but the producers seem reluctant to pursue this avenue any further. Hopefully things will get stirred up a little bit next season for our self-satisfied love birds.

Andy has somehow gone from being my least favorite to favorite character on the show. The guy is a just a bottomless pit of good cheer and merriment. In a recent episode he uttered his second best line of all time, "I'm not going to step on your funk, bro," referring to Dwight's unimpeded pursuit of the new receptionist. That was almost as funny as "Steer clear, big tuna. Head for open waters." 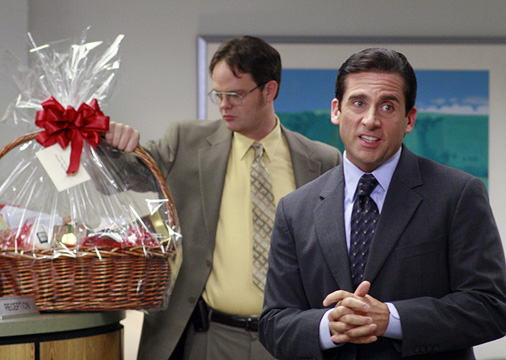 Dwight's character has been all over the map in recent seasons. He's the equivalent of particle board, comprised of any comedic scraps that might be lying around on the writing room floor at the end of the day. Giving birth to a watermelon? Carrying on with Angela in the supply closet? Tying Jan's stroller to the back of his car? What happened to the hard-nosed, by-the-book conservative from season one? Some consistency in the writing would be nice.

Speaking of Jan, Michael's neurotic but lovable ex-boss and ex-girlfriend, why does she only appear in two episodes or so per season? She asked Michael to stay away from Holly, and then there was no follow-up on this storyline whatsoever. I guess the show's 82 writers were not all on the same page that time around. Then, in the episode where Michael climbed into the train boxcar to escape his debts, we seemed to get a glimpse of a warmer, more caring Jan. I thought she was a much better match for Michael than Holly. If you're going to bring one of his ex's back, bring back Jan. Holly can stay gone forever, as far as this chief financial officer is concerned.

The sub-plot involving Dwight, Andy, and Angela (or Dwangelandy), in my opinion, resulted in an unnecessarily harsh portrayal of Angela. She was already considered the office witch, but I thought she had some likable qualities in spite of her iciness. Why was it necessary to demonize her to the point of making her a caricature? I have started to worry about this show's consistently negative portrayal of women.

It was refreshing to see boss Michael Scott get his ass handed back to him for being an annoying, incompetent doofus. Let's get real here. There's no way people can party all day at work under the capitalist system we are blessed with, at least not at a paper company. Maybe at AIG, Fannie Mae, or Enron, and we all know what happened to those companies. Yes, I know the show is not meant to be an accurate portrayal of the workplace, but let's not treat Michael like some kind of hero because he wants to turn it into romper room. The third world slave laborers who produce the merchandise we buy at the local big box stores might watch this show and wonder if this is typical white collar behavior. "Do they really party all day while we work ourselves to death?" The answer is obviously no; things are tough all over except at the multi-millionaire tippy top. The writers could show a little more decency in this regard. The people living large are not at your local paper company. OK, that's my rant. Call me a capitalist pig or a commie or whatever else you like.

Forward looking statements by the management: we're all looking forward to the next season of The Office.