It was a slow day at Valley Pest Control when the phone rang. The receptionist, Sue, had left at lunch time, so Russell answered it.

"Valley Pest, can I help you?"

"Yeah, I hope you can. I got bugs running around all over the place."

Russ got the man's name and information.

Russ slowed his van as he approached the house and rechecked the address he had written down. 835 Chestnut Street. This was the place. He pulled into the driveway behind an old blue Pontiac Firebird. The lawn was overgrown with weeds. The house, like the car, had seen better days. He climbed the creaky steps to the front porch and saw that the front door was open an inch or two. He pressed the doorbell button, which made no sound, and then knocked on the door. He heard no reply, knocked again and there was still no answer. He pushed the door open and stepped into a dim living room. He looked down and saw half a dozen cockroaches running for cover. It gave him a shudder. After five years as an exterminator he still wasn't used to seeing those things.

"Back here in the kitchen," a voice replied.

Russ walked cautiously to the dining room and took a left. A stubbly-faced old man with a flannel shirt sat at a kitchen table holding a newspaper in one hand. Rays of afternoon sunshine came down through the windows and illuminated the otherwise dingy room.

Russ glanced around the kitchen and spotted several more bugs. "I can't complain, but it looks like you can," he replied. "I'm gonna help you get rid of these things. What have you got? Mostly cockroaches?"

Mr. Higgs set his paper down. "Oh, roaches, spiders, gnats, centipedes, you name it. Not many flies, though, thank Jesus. Mostly big roaches, I guess. I don't know how so many of 'em get in here. People in the neighborhood think I love bugs, like I collect them as pets or something. They started calling me 'the bug man'. The truth is, I tried to get rid of them for years. Had the place sprayed every six months or so, but they just kept coming back. Then I figured, what's the use of spraying all this poison that's bad for my health if it's not doing any good, so I just learned to live with them." 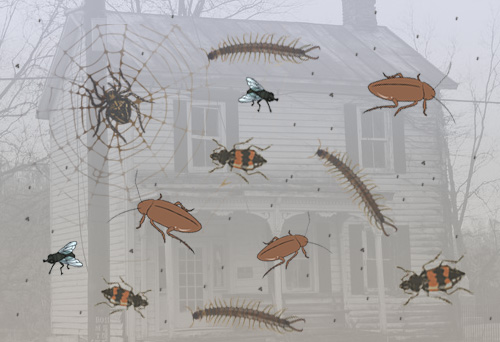 Mr. Higgs pointed toward the floor as two cockroaches sped defiantly past Russell's feet to join a group of five others on the other side of the kitchen."But now, you can see it's gotten way out of control. People won't come to visit me anymore. My daughter said she was going to call the exterminator herself if I didn't do it soon."

Russ nodded sympathetically. "Well, you'll be happy to know that Valley Pest Control uses a special proprietary formula that's a lot safer than what the other guys use. Enviro-friendly and all that," he said, holding up his canister. "This stuff won't hurt you unless you spray it on your food. Not only that, but it works better too. You'll be bug-free in no time."

Several weeks later, Russ stopped by the house again on his way home from work. Bart Higgs' phone had been out of service when Sue had tried to call him about his unpaid bill. His old Firebird was still in the driveway. Russ got out of his truck and looked at the house for a minute, then noticed that a kid on a bicycle was looking at him curiously from the foot of the driveway.

"Are you going to see the bug man?" the boy called out.

"Yes, but you shouldn't call him that. His name is Bart Higgs," Russ replied.

"OK, if you say so," the kid said with a smirk. "If you want to get in there, you'll have to go around back and climb in the window. That's what my friends Logan and Chris did one time. They snuck in there late at night and saw the bug man. He told them to get out and they got scared and jumped back out the window and ran all the way home."

"Well, served them right. They shouldn't have broken into his house like that," Russ said.

"It doesn't matter," the kid said. "Nobody has lived there for years. Bug Man's daughter has been trying to sell the place all that time but nobody wants to buy it because they can't get rid of the bugs. Sorta what they call an urban legend."

"Yeah, he died a long time ago. Didn't you know that? I thought you were one of those ghost chasers."

The kid was obviously pulling his leg, Russ thought.

"Well, I hate to disappoint you, but he's a real living person. I just talked to him a few weeks ago."

The kid, looking frustrated, fished around in his head for a second and came up with one of his dad's common phrases. "Believe what you want to believe, mister," he said, and took off down the sidewalk on his bike.

Russ watched the kid for a second, then turned and headed toward the house. The front door was slightly open again. He knocked on the door, then pushed it open and stepped in.

"Yes, back here," came the familiar voice from the kitchen.

He stepped toward the dining room, scanning the worn yellow-brown carpet for bugs and feeling relieved not to see any.

Bart was sitting at his kitchen table, wearing the same plaid flannel shirt. He extended a hand and Russ shook it. He seemed real enough.

"Great job on the bugs. I've only seen one or two since I swept up all the dead ones," Bart said with a chuckle. "You've got yourself a repeat customer, that's for sure. Maybe now I can sell this old place and get me a fancy condo somewhere."

"Yes, I've got it right here," Bart said, tapping his fingers on an envelope on the kitchen table. "I laid it down in the other room for a couple of weeks and forgot about it. I'll have the check in the mail for you tomorrow."

A newspaper was lying open on the kitchen table, and Russ noticed a headline about the Phillies' recent winning streak. They talked for a minute about baseball and the weather, then Russ said goodbye. On the way out he passed by the blue Firebird in the driveway. Hadn't the back tire been flat before? He couldn't remember. Also, the car looked like maybe it had been washed. He got back in his truck and drove home.