The Dark Side of the Jesus Fish

I was driving to work a few years ago and, as usual, was in a hurry to get there on time. As I drove through the city streets that morning, an aging white sedan in front of me was driving much slower than seemed necessary. I was repressing the urge to curse loudly when something caught my eye. It was a Jesus fish attached to the car's bumper. "Patience," I reminded myself. "That's what Jesus would have wanted."

For most of my life I wasn't religious and I still self-identify as an agnostic. Basically, I think science is important, but religion has some good ideas too. The incident mentioned above got me thinking more about the meaning of the emblem on the back the slow driver's car.

You may have seen this mysterious fish on someone's vehicle and wondered what it means. Do they like to eat fish? Maybe, but it's usually used as an indication of a person's Christian religious faith. According to Wikipedia, the symbol is officially called an ichthys, which is Greek for fish, and was also used by early Christians starting around 200 AD as a secret form of identification. But why a fish? There are numerous symbolic references to fish in the New Testament. For example, many of Jesus' Apostles were fishermen and he told them they would be "fishers of men" by spreading the Christian gospel.

To many non-Christians, the Jesus fish came to mean "I'm a religious nut." To them it embodies an attitude of superstition and intolerance. The symbol was famously lampooned on an episode of Seinfeld wherein Elaine discovers that her new boyfriend, David, has a Jesus fish on the back of his car. After asking him if it was going to be a problem that she wasn't religious, he replied, "Not for me. I'm not the one who's going to hell." The scene was a good summary of how non-religious people used to see self-professed Christians.

After the initial appearance of the Jesus fish on people's cars in the early 1980s, the controversy escalated a few years later when non-religious people began putting mutated versions of the fish on their vehicles which had legs and feet and the word "Darwin" in the center of the symbol. This was meant to show support for Darwin's theory of evolution, the idea that life on earth developed through a natural process without any heavenly intervention, which contradicted the belief in creationism held by many Christians. 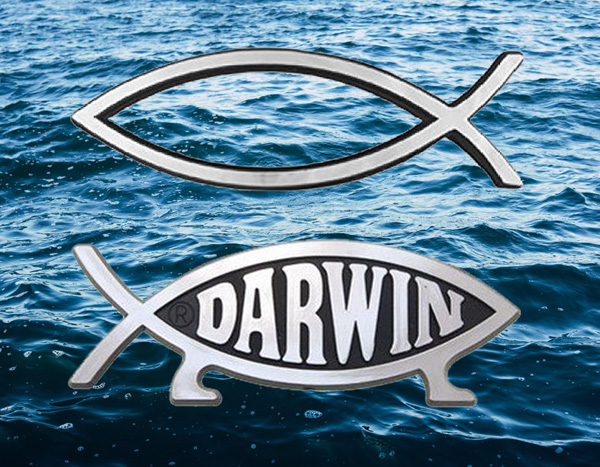 I'm no Bible scholar, but I'm guessing that if Jesus himself were to weigh in on the creationism vs. evolution controversy, he would say that everybody is missing the point. The point of his teachings was not to turn groups of people against each other, with one side claiming moral or intellectual superiority against the other. He might also say that religion and science are both valid forms of thought which can coexist and complement each other.

Another point Jesus might make is that the ichthys has a meaning that is rarely talked about anymore. The first time I saw the Jesus fish, way back in the early 80s, I asked somebody (I don't remember who, exactly) what it meant. The answer I received was that it was a reference to the story of the feeding of the 5000 in the New Testament. In this story it is said that Jesus fed a crowd of 5000 followers with only two fish and five loaves of bread. He divided the bread and fish into small portions and gave them to his twelve disciples, who dispersed them among the hungry crowd. According to some interpretations, Jesus miraculously multiplied the small amount of food in order to feed the entire crowd.

Contemporary Christian explanations of this story emphasize the miraculous aspect of the event and cite it as a proof that Jesus was the Messiah. It is unclear in the Bible accounts whether he actually multiplied the amount of food (although this is the common belief) or simply divided it into small enough portions to feed the whole crowd. It seems just as possible that the hunger of the crowd was alleviated by their faith in spite of the small portions of food. Either way, the story provides an important lesson for us in modern times: Our needs will be provided for if we treat each other with kindness and respect. If we work together, we can survive any hardship.

An important point in the story is that Jesus did not keep the bread and fish for himself. He did not announce to the crowd, "It's getting close to dinner time, we have to call it a day. We have a little bit of food here, but there's only enough for me and my Apostles. I'm sure you're all hungry too. I believe there is a nearby town over in that direction with some places to eat. Goodnight and have a safe journey. Meet us back here in the morning and we will resume our conference."

This would seem like a normal and reasonable way of dealing with the situation in our modern world, but this is not what happened. Shockingly, what the story in the Book of Matthew actually says is that he dispersed the small amount of food throughout the entire crowd of 5000 and that "They all ate and were satisfied." This scene of mutual prosperity through sharing may seem strange in the every-man-for-himself America of today.

For some, the biblical tale probably veers dangerously close to communism and raises the old question: If you're financially successful, why should you consider the needs of others instead of simply looking out for your own interests? Wouldn't sharing reduce your standard of living? And if you perceive that you live in a society full of selfish and cruel people, it may seem fair or even necessary to live your life the same way. But there are practical reasons for showing kindness to others beyond simply acquiring the label of "good person".

Having an attitude of giving helps to improve society as a whole as well as your own life. It reduces conflict and helps to maintain friendly relations others. It also sets a positive example and encourages others to live the same way. This concept is described in several major world religions. Christians know it in the form of the Golden Rule, which states: "Do unto others as you would have them do unto you." In Hinduism, Buddhism, and other eastern religions it is known as the principle of karma, which says, in essence, "You will reap what you sow." Your kind or selfish behavior toward others will be returned to you as a natural consequence of your actions. The more hostile you become toward others, the more hostile they will become toward you. The more you give, the more you will receive. 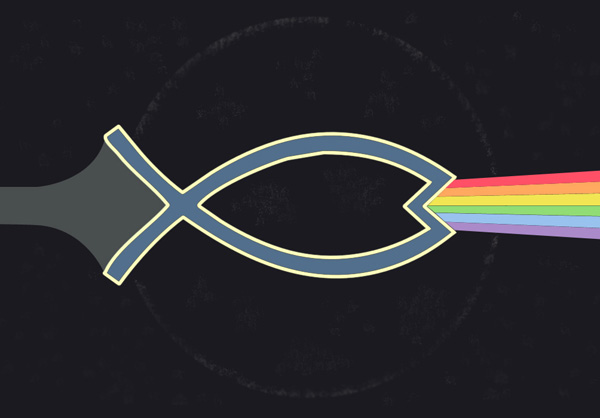 The Jesus fish, sadly, never reached it's full potential as a symbol of cooperation and human kindness. It seems likely that certain fans of free market capitalism in the 1980s may have regarded the feeding of the 5000 story as the dark side of the Jesus fish, and may have been relieved when the Darwinists came onto the scene to reframe the symbol as an expression of Creationism and an anti-science mindset.

It is one of the great ironies of history that many Christians came to embrace the conservative political philosophy of Social Darwinism, in spite of their opposition to the theory of evolution. The concept of Social Darwinism was developed in the 1800s by an English philosopher named Herbert Spencer. He coined the term "survival of the fittest" as a synonym for Darwin's theory of natural selection and sought to apply the concept to sociology. Spencer opposed government intervention to help the less fortunate, because he claimed it would interfere with the natural process of evolution and allow the "unfit" to survive.

Social Darwinism was a small part of Spencer's complex set of philosophical beliefs. He held other, more progressive views, such as opposing non-defensive wars, slavery, sexual inequality, and censorship. He is seen by many as a founder of libertarianism. He supported altruism through private charities (as opposed to government programs), and saw utilitarianism as the best model for society, which hypothetically provides the greatest possible happiness for the greatest number of people. In spite of these complexities, his Social Darwinist ideas were seized upon and promoted by wealthy capitalists as a justification of the social inequality of the Gilded Age of the late 1800s, and they succeeded in bringing about a more competitive culture in America which has continued until the present day.

For these reasons, maybe it would be more ideologically consistent if conservatives embraced the Darwin crawler symbol and displayed it on their vehicles instead of the classic ichthys. Similarly, it might not be inappropriate for non-religious persons to display the Jesus fish on their vehicles as an expression of socialist political ideology. The words of Jesus in the New Testament are a lot closer in spirit to socialism than American-style capitalism. There are multiple instances wherein Christ advocates sharing and giving to the less fortunate, and even states in a well-known verse that hoarding wealth will prevent you from entering the kingdom of heaven.

It would be borderline insanity, of course, to suggest that the typical owner of a vehicle adorned with a Jesus fish advocates the communal sharing of all wealth and resources. And yet there is no denying that the feeding of the 5000 story is one of the most important lessons in the Bible and a miniature roadmap of how to create a more peaceful and orderly society, and how to avoid the violent hellscape that looms in our future if we allow ourselves to ruled by fear and hatred. So the next time you see the fish on the back of someone's slow moving vehicle, have a little patience and remember there is a very solid and important message for humanity behind that symbol.