How Bad Will Things Get Because of Climate Change?

It's fall of 2019, and the debate over what to do about climate change continues to drag on in Washington even though most Americans favor immediate reduction of greenhouse gas emissions. The number of those who accept the reality of human-caused climate change is now a majority (62% according to this recent poll) and this view is backed by scientific consensus. Meanwhile, the deniers continue to express their skepticism across the Internet, advocating a policy of doing nothing in conjunction with the fossil fuel industry and their lobbyists. In other words, the stability of earth's climate still has an uphill battle to fight in the halls of power, although public opinion is moving in the right direction. The mainstream news media, of course, deserves a large share of the blame for perpetuating the attitude of apathy, steadfastly refusing to utter the phrase "climate change" while extreme weather events ravage the world. Meanwhile, the BBC recently suggested that governments have only until the end of 2020 to take definite action to reduce carbon emissions. After that it may be too late to avoid the most disastrous consequences of global warming. 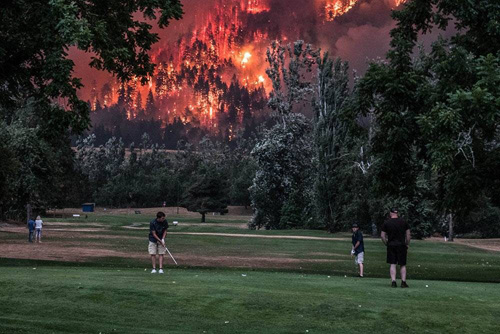 Golfers unfazed by a nearby forest fire in 2017

With all that in mind, the following assessment is my attempt to realistically answer the question "How bad will things get for us because of climate change?" I will do this by looking at both the worst and best case scenarios, along with our current situation, and then I will make a prediction. This is only speculation, of course, based on what I have learned about the subject from various sources.

The worst case scenario ends with the extinction of all or most life on the planet. Politicians continue business-as-usual energy policies, and the media continues to say little about the effects of climate change, preserving the illusion that everything is "normal" until society collapses. Mass migrations from flooded coastal areas cause social and economic chaos, with a dramatic sudden increase in unemployment and homelessness. Unpredictable weather like droughts, rain storms, hurricanes and tornadoes make farming very difficult, making food too expensive and leading to mass starvation of non-wealthy people. The disruption of the eco-system by extreme weather causes many, if not most, animal and plant species to go extinct. 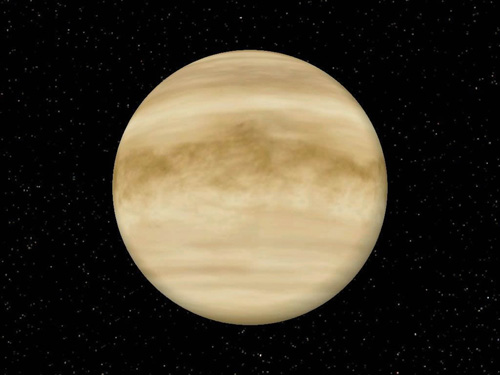 Venus: a look into Earth's future?

It has been speculated by some that if we pass the carbon emissions "tipping point," a phenomenon known as the runaway greenhouse effect will occur in which the planet's temperature begins to increase exponentially, eventually killing all life and causing the oceans to boil and evaporate. Our neighboring planet Venus is real life example which shows the end result of this process. It is thought that Venus once had a climate similar to Earth's, but due to its closer proximity to the sun, the runaway greenhouse effect took hold at some point (presumably without the pollution of humans or another developing race) and transformed the planet's climate to a toxic hellscape with a temperature of 750 degrees and a thick, poisonous atmosphere. It is thought by most scientists that although this phenomenon is possible on Earth if carbon emissions continue at their current rate, it will probably not reach the extreme conditions of Venus because of Earth's farther distance from the sun. Even so, only an insane or extremely corrupt person would use this as an excuse for continued fossil fuel use. Life on this planet depends on climate stability, and we continue to witness the disruption of that stability, worsening every year while we wait around for our leaders to take action.

In a best case scenario, the US and world undertake a frantic conversion to clean energy use, minimizing the melting of the polar ice caps and sea level rise, reversing ocean acidification, and eventually restoring stability to the climate. Displacement of coastal populations occurs only in a few low lying areas like Florida. People become more environmentally conscious in general and seek to live in harmony with the eco-system, moving away from the current lifestyle based on the endless production and consumption of goods for profit. There would be a new focus on producing reusable, long-lasting products instead of planned obsolescence. Communities would become more self-contained, with local economies able to meet the needs of their citizens without the lost-distance transport of commodities from other places. (On a side note, political localism seems to be gaining popularity as a cure for the extreme partisanship resulting from a centralized national government having too much power.)

This miraculous happy ending would require governments to become more responsible to the basic needs of all people and commit to safeguarding the health of the natural environment. Given the current state of the US government and media, establishments which concern themselves only with corporate appeasement, the scenario seems highly unlikely, if not laughable. Tied up in all of this is the issue of wealth disparity, which allows the richest individuals to have excessive influence over the political process while the poorest three quarters of the world's population has almost none at all. These individuals have the financial means to survive the near-extinction that awaits us if effective action is not taken. The rest of us do not.

We are currently on track for the worst case scenario. Those who fail to plan and prepare for the worst (meaning those who mistake media complacency for proof that there's nothing to worry about) will join the next wave of climate catastrophe victims. Residents of coastal areas and island nations like Puerto Rico and the Bahamas are already seeing repeated devastation by the ever-increasing occurrence of hurricanes. The downpours of rain caused by these storms are resulting in the flooding of towns and residential areas, which is disturbing, considering that the melting of the polar ice caps has barely even started yet. We know with certainty that the flooding will get exponentially worse after sea level starts to rise, and super-sized hurricanes will be dumping that extra water onto inland areas, as we have seen in recent years, not just the coast. 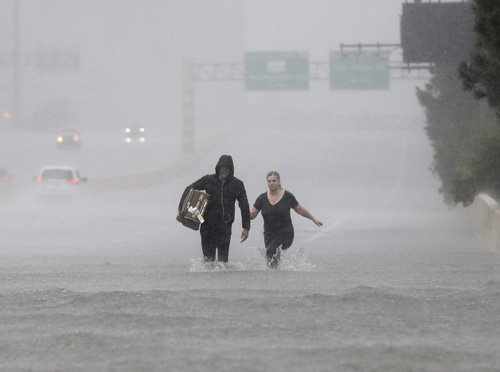 If we allow the polar ice caps to melt completely, which is started to look more likely with every year of government heel-dragging and can-kicking, the map of the world will be transformed and there will be a great reduction of the world's above-water land mass. And just in case that doesn't sound dire enough, the melting of all the polar ice would also release massive amounts of methane into the atmosphere, possibly making global warming irreversible and triggering the runaway greenhouse effect which would end all life on the planet.

Climate scientists continue to report that the crisis is escalating quicker than previously thought. Clean energy development, however, is also occurring rapidly and the younger generations seem to be embracing this trend. It has also been reported that the cost of clean energy production is now comparable to that of oil and coal production and it is thought that it will be cheaper by 2020. This trend, along with the growing public outcry against continued fossil fuel use, should make wind and solar more attractive to utility companies. Government tax cuts and subsidies for clean energy producers would definitely help to speed up the process.

All this information can now be used to answer the question, "How bad will things get because of climate change?" Assuming actual future events will fall somewhere between the worst and best case scenarios, we can expect the following: substantial melting of the polar ice caps in this century, widespread coastal and inland flooding, and an increase in the frequency of extreme weather events, which will continue to awaken the public to the reality of climate change. There will definitely be some socio-economic turmoil as people are forced to relocate to more livable areas, and hopefully governments will find humane ways to deal with the situation in order to maintain peace and prevent the collapse of society into a state of barbarism.

Climate change deniers will be relegated to the status of flat-earthers, and will be seen as completely out of touch with science and rationality. People will learn the importance of protecting the environment and the eco-system which provides the food, water, and air we need for survival. In short, our immediate future is presenting us with a huge and burdensome challenge, but also with an opportunity for learning and evolving. The human race will most likely survive this and become much wiser as a result.

One thing is very clear: the US government needs to show leadership and act now to jumpstart the transition to clean energy before it's too late. US citizens need to use every non-violent method of persuasion available to hold their elected officials accountable and force them to take action. Call them, email them, visit their offices in person. Leave comments on their social media pages and send them old fashioned snail-mail letters. Protest, or even better, organize boycotts against the corporate interests that are preventing this change from taking place. The time for action is now.