Learning to Coexist with CBS

CBS has recently billed itself as "America's Most Watched Network." Really? The thought that this could be possible is slightly mind-boggling. Am I that out of touch with my native country?

For the past decade or so, I have tended to lump all of CBS' programming into a category I call "Loads of Pointless Crap." The chief component of this catagory is that ever-existing, never-changing staple of network television, the crime drama. CBS never met a crime drama it didn't like. The network currently has eleven of them in their prime-time lineup. This includes three different versions of CSI and two of NCIS. For the sake of fairness, I decided to check out a couple of the network's currently airing crime dramas.

This is a new show, and based on early reviews, I anticipated that this J. J. Abrams twist on the crime genre might be worth watching. It has a semi-interesting sci-fi twist, and features both Michael Emerson of Lost fame and Jim Caviezel, who played Jesus a few years back. The show follows the adventures of former CIA agent John Reese, who gets information about bad guys from his billionaire boss who has a crime predicting supercomputer. He also gets into a lot of gunfights and car crashes and that kind of thing. Caviezel has the Clint-Eastwood-whispering-badass persona down to a T, if you're into that vigilante-type thing. Reese's boss, Mr. Finch, lacks the flair and depth of Benjamin Linus, Emerson's character on his previous show, Lost. This is not a terrible show, but not one I feel bad about missing. Maybe I'll watch it a couple more times, but life is short. I've got places to see and people to be.

After my unremarkable viewing of the Person of Interest premiere, I found myself watching The Mentalist for the first time. This is a very laid-back, less predictable take on the detective genre. The lead character is tea-sipping Patrick Jane, a former psychic entertainer, who now uses his mental trickery to solve crimes. He's also trying to track down a guy named Red John who killed his wife and daughter. This show is so well-written it makes me forget I'm watching a crime drama. Score one point for the network.

CBS is also the home of various popular sitcoms, which I try to avoid watching at all costs. Here are my thoughts on a few of them:

This seems like a show I should be able to relate to, with its underlying nerd theme. But let's face it, no self-respecting nerd wants to see himself portrayed as a social reject who can't get laid, no matter how true that may be. Nerds prefer to think of themselves as suave, mysterious James-Bond types that nobody can figure out. This is one of the things that made Benjamin Linus from Lost a nerd hero of the ages. He may have been a flop with the ladies, but he was the one running the whole show. Not only could he play Rachmaninoff on the piano, he could also kick butt when necessary. Big Bang Theory, by comparison, only rubs salt into the wounds and reinforces negative stereotypes. Of course, that observation is only based on the ten minutes I've spent watching the show, so correct me if I'm wrong.

How I Met Your Mother

Here's my problem with How I Met Your Mother: Alyson Hannigan will always be Willow to me, and Neil Patrick Harris will always be Doogie Howser. I really don't want to see them as crusty, jaded adults. I also don't get the premise of the show. The title sounds like a nostalgic story of how a couple fell in love and got married. I have no idea which character is supposed to be the mother, or who is meeting her, and I don't even care enough to look it up on Wikipedia. 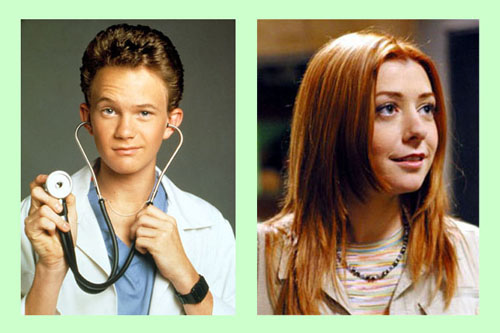 Neil and Alyson of yesteryear

Two and a Half Men

This is the sitcom equivalent of Darth Vader, with syndicated episodes popping up on every channel at all times of the day, grabbing you by the throat and beating you into unconsciousness with a barrage of manly-man humor. I could never quite figure out which character was the half man -- the drunk womanizer, the groveling loser brother, or the kid. Sadly, the show had to part ways with wonderful Charlie Sheen, so it looks like I'll be watching it even less than I did before, now that the equally wonderful Ashton Kutcher has replaced him (hope you caught my sarcasm there). This begs the question, is it possible to watch a show a negative number of times? Looks like my hatred for this program may have warped the laws of physics.

I guess at this point I should try to find a couple of good things to say about CBS. I'll definitely be watching The Mentalist some more. The Amazing Race was always pretty good -- I'll probably watch that some more too. And let's not forget about all those great CBS shows of the past like Jericho and... The Dukes of Hazzard and... Touched by an Angel?

Back in the 90s I was a fan of Dan Rather on the CBS Evening News, who started in 1981 as the successor of the famous anchorman Walter Cronkite. Dan had a deadpan delivery and dry wit, and gave the impression of having something approximating journalistic integrity. He was forced out in 2005 after being accused of reporting a false story about George W. Bush's military service record. Rather was replaced by Katie Couric, who wasn't bad, but seemed out of place behind the anchor desk. She looked a lot happier covering parades on the Today show.

Katie stepped down in May of this year, and was replaced by Scott Pelley, who worked for CBS News for several years before landing the anchor chair. Now, I'm not saying that Pelley lacks integrity, but I'm guessing that his typical workday as anchorman consists of the following routine: He calls up one of the conservative think tanks and asks them what information he should be reporting that night. They fax the script over to him, then, he spends several hours calling all of CBS' sponsors to make sure none of the news stories are offensive to them. This usually results in most of the day's news being deleted and replaced with various types of filler about dogs and people-making-a-difference segments. Keep up the good work, Scott. I'll be watching Brian Williams on NBC, who probably isn't much better, but at least seems sincere.