Wall-to-Wall Happy Endings on The Office

After several months of tough negotiating and yard work, I have finally managed to get my computer back from my mother, under the condition that I never mention her in my blog posts again. Therefore, I can't respond to her denials about what transpired last year at a local Applebee's or her claims that I'm delusional and can't tell fantasy from reality. That's alright, I will honor your wishes, Mom. I never should have posted information about your personal life on my blog, and I apologize. Please don't lock my computer in your closet again.

Anyway, enough about that. This is the blog where I'm supposed to be writing about television, which I haven't done for a while, and one TV topic above all others has been clamoring for my attention lately -- the final season of The Office. The show concluded in May with an ambitious hour-long episode which tied up all the loose ends and seemed tailored for the fans. Personally, I couldn't have been much happier with it.

If you haven't seen the final season yet and were planning to watch it at some point, this post will be like one big SPOILER, so read on at your own risk.

First of all, I'm applauding the producers of The Office for delivering one of the most unexpected moments in the show's history: a dramatic fight scene between usually-happy couple Jim and Pam. Very well done, guys. I'm guessing this scene resulted in plenty of indignant fuming on message boards by the Jim-and-Pam-forever shippers, and probably others who thought the scene was too serious for their favorite light-hearted sitcom. Personally, I loved the realness of it, but I'm glad the two patched it up in the end. It would have been pretty heart-breaking to see them part ways -- there would have been fan riots in the streets of Scranton.

Another final-season scene I liked a lot depicted Darryl struggling to overcome his self-doubts while interviewing for a job at Athlead, Jim's sports marketing company in Philadelphia. The awkwardness of the job search has rarely been portrayed with such believability. As somebody who's been stuck in a convenience store job for several years, I've been hoping to summon that kind of courage in my own life sooner or later.

An additional window into reality appeared in the episode where Pam stood up to the mischievous warehouse worker, Frank, who defaced her wall mural with little butt-shaped squiggles. When confronted about his deed, the guy fessed up, and offered only "butts are funny" as his justification. Pam, with Dwight's help, responded with a little touch-up work on the culprit's truck. This provoked a furious response from Frank and for a moment it seemed Pam might get attacked until a member of the documentary film crew literally lowered the boom on the guy's head. It was a nice, unpleasant side trip into the subject of conflicts with co-workers -- we've all been there, but most of us don't talk about it much.

Andy "Nard-Dog" Bernard spent the final season sinking into the quicksand of his own stupidity and self-induced misfortune. After getting his job back as manager at the end of the previous season, he immediately disappeared for three months, leaving his workers behind to self-regulate, along with his bewildered girlfriend. When he returned he narrowly escaped losing his job when the CEO discovered his absentee status, and was stunned and dismayed when he discovered Erin had a new boyfriend. Then he decided to quit the paper company again so he could pursue his dream of being a star, ignoring his co-worker's pleas for him to keep his day job so he wouldn't end up homeless. It was all way over the top and frustrating to witness.

Here at the Crawlspace, we've decided to put together a task force to figure out why Andy was such a clueless idiot in the last season. So far, we think the breakup with Erin and Packer's drug-laced cupcakes were the main drivers of his erratic behavior. "But what explains the three-month yacht excursion which occurred before those events," you're probably asking. That's a good question, and we'll give you an answer as soon as we have one. Could it be that he was, I don't know, hung over or something?

Creed, the enigmatic fan favorite, was always the dark horse of the show. We never knew much about him, and he could have turned out to be a mad scientist or a secret agent or maybe even the second coming of Jesus. The viewers finally learned more about him in the final episode, when it was revealed that he was a member of the real-life band The Grass Roots, who had a couple of big hits back in the sixties. Office fans got to hear Creed play acoustic guitar and sing in the finale, before he was taken away by the police for various charges.

The final season seemed like several different shows taking place within one show, which is not necessarily a bad result, artistically speaking, but probably not one intended by the producers. It was like being in a giant house with many different rooms. As in previous seasons, some characters seemed more real than others. The minor players like Meredith, Stanley, and Phyllis stayed true to their standard personae. Dwight and Andy remained wildly unpredictable. We finally got to see a more vulnerable side of Angela and a compassionate side of the usually cynical Oscar. Angela could barely make ends meet after her split with her senator husband, so Oscar offered his home as temporary shelter for the cat-obsessed accountant and her baby, an offer which she accepted. After years of seemingly cold relations, it turns out they were not such enemies after all. In my opinion, this type of character development is what sets the The Office above most other sitcoms.

In my first post about The Office, back in 2008, I discussed four workplace love triangles that existed at the time. Yes, there was a lot of office hanky panky going on back in the fourth season, and it's surprising that any paper was sold at all during that time. Strangely, these four triangles were resolved to some extent in the final episode, five years after I made note of their existence. During the final hour of the show, Jim and Pam re-affirmed their love for each other and decided to move to Austin, so Jim could pursue his business venture. Dwight and Angela had their long-awaited wedding during the same episode, and in attendance was former manager Michael Scott. He had married Holly Flax after leaving Scranton, and at the wedding he showed Pam photos of their kids. Also present at the wedding were Ryan and Kelly, who ended up leaving together after a long separation. This four-way de-triangulation resulted in Andy, Toby, Darryl, and Jan being hypothetically left out in the cold, although most of them had long since moved on to other relationships with varying degrees of success.

Toby's romantic bad luck was not improved by his awkward advances on Nellie earlier in the season. He seemed to be one of the few men alive who didn't light her fire. Well, at least he got to dance with Pam at Dwight and Angela's wedding. I have to say, in all honesty, that Toby is the Office character that I identify with the most. He always seemed to view the goings-on at the Scranton branch as more of an outsider than a participant, and he's probably the only one on the show who would have written a blog like mine (although Ryan had a photography blog). I would rather be Jim, living his all-American fairy tale, and sometimes I try to be funny and outgoing like Michael Scott, but at the end of the day I'm basically just Toby. I'm not sure if that's a bad thing or not. 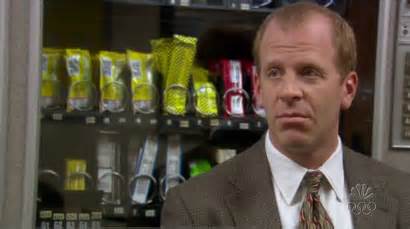 The final episode wrapped it all up with class and gave the fans what they wanted, avoiding any kind of dark or dramatic developments, which was probably for the best. I think, in hindsight, the quality of the The Office did not suffer much after the departure of Steve Carrell. The show did seem a little less focused, and a couple of erratic episodes here and there were real stinkers, especially the one about the lice. Overall, however, the show was solid from the first season to the last. The only other long-running sitcom I can think of that maintained that quality level was Seinfeld.

And so, the curtain closes on the Dunder-Mifflin paper company, and as with other great TV shows, I'm guessing that I will continue to inhabit the world of The Office long after the filming has stopped. I'll sit there at Jim's desk and pretend to make sales calls, throw paper balls at Dwight, get into arguments with Stanley, trade recipes with Phyllis, and talk about the meaning of life with Creed. How long will I stay there? Who knows. Maybe a new show will eventually come along to capture my imagination and aid me in my never-ending quest to escape from "reality," whatever that is.