Wow, the 2013 Fall TV season really snuck up on me this year, so I apologize for not getting this posted sooner. I'll spare you the excuses. Since I haven't written in a while, first I'll say a few words about last season's shows.

As I might have mentioned last time, I've started to question my faith in network television over the last couple of years, with so many great new shows getting axed after one season or even half a season. Earlier in the year, two more favorites, 666 Park Avenue and 1600 Penn were tossed into the TV mass grave with the corpses of The River, Terra Nova, and Ringer.

666 Park Avenue, in spite of its campy name, turned out to be one of my all-time favorites. I think if more people had given it a chance, it would still be with us. ABC delivered the final four episodes during the summer, as promised, and the show's writers managed to wrap the whole thing up in a way that provided closure to the fans. The ending was a suitably dark leap ahead in the show's timeline, showing us the destiny of characters in this creepy-but-fun drama. If you have a taste for the supernatural genre, this is definitely one to get on DVD (or to watch on Netflix or whatever. I fully realize that the trend of technology is away from physical ownership and toward internet cloud-based storage and consumption. Kind of depressing, really. We'll be sitting in our empty houses with no DVDs or CDs or books, glued like addicts to our wireless electronic devices. Not to mention, all the music, movie, and book stores will be put out of business in the process. Is there any way I can opt out of the future?) 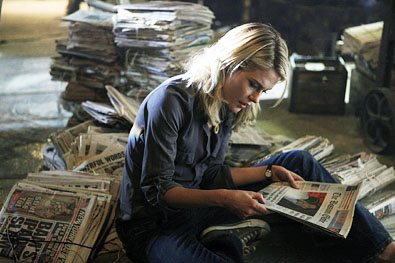 Jane tries to figure out what happened to her show.

1600 Penn - NBC has come up with a lot of terrible sitcoms in recent years, but this show about a fictitious US president and his family was a winner in my book. Jenna Elfman co-starred as the first lady, and exuded a kind of warm, cub scout den-mother likability (and she looks pretty stunning for her age, I might add.) The adult son's lovable-goofball antics in a White House setting seemed like a witty enough premise, but America has once again disagreed. Yet another great show cancelled after half a season. Somebody tell me again how the hideously terrible 30 Rock lasted so long.

Siberia - Just when I was sure there would never be another show as good as 666 Park Avenue, NBC aired this amazing serial drama during the summer. It tells the tale of a Survivor-style reality show that turns incredibly weird. The first few episodes are presented in the style of a reality show, which may have had some people mistaking it for the real thing. Siberia is also similar to Lost in many ways, but is more coherent and suspenseful. It keeps you guessing and on the edge of your seat. The writing, acting, and directing are all top notch. I can already tell from the mania in various blog comment sections that this show is destined for cult status.

Too bad NBC made the highly questionable decision to run the show in the same time slot as the CBS series Under the Dome, which is based on the Stephen King book of the same name and has been killing Siberia in the ratings. I would probably be watching the show too, but I made a rule that, as a Stephen King fan, I wouldn't watch any TV show or movie based on one of his books until I've read the book first. Anyway, I think most of the Under the Dome fans would love Siberia if they were aware of its existence. For the last couple years there's been a lot of great shows to get iced before their time was due, but I think I'm really gonna be sick to my stomach if Siberia doesn't get at least one more season. 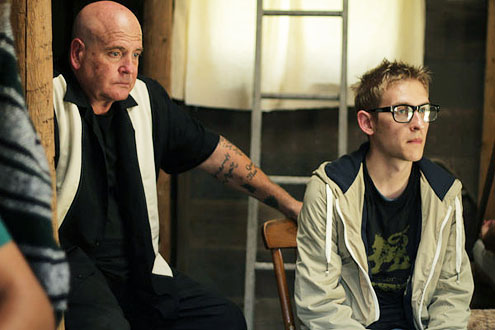 Hannibal - This dark crime-thriller featuring the famous movie cannibal debuted back in April on NBC. I watched an episode to see if I could keep my cookies down. I was in luck. This version of Hannibal is suave and stylish. He doesn't tear at his victims' bodies like a wild animal, but instead converts them into tasty culinary creations and shares them with unsuspecting dinner guests. By day the devious foodie works as a forensic psychiatrist who aids the FBI in tracking down serial killers, and his profiler friend Will sometimes gets lost in his visions and turns to Hannibal for support. Another factor influencing watchability is Gillian Anderson of X-Files fame in a recurring role as Hannibal's psychiatrist. (Were you aware that psychiatrists have psychiatrists? I wasn't either, but I could probably use one of my own after watching this show.) Hannibal has been renewed for a second season that will begin in 2014.

Here's a quick rundown of new shows that might be good in the upcoming 2013 Fall season:

Sleepy Hollow (Premieres Monday, Sept. 16th on FOX) - As the name implies, this is a TV adaptation of the famous story "The Legend of Sleepy Hollow" by Washington Irving. I'm assuming this modern-day interpretation will be a prequel of sorts, which takes place before Ichabod Crane's fateful meeting with the Headless Horseman.

The Blacklist (Premieres Monday, Sept. 23rd on NBC) - James Spader plays an enigmatic crime boss who turns himself in to the FBI, then offers to rat out various big players in the crime world, but, for some unknown reason, will communicate only with rookie agent Elizabeth Keen. As you might know, I'm not big on the crime shows, but I will at least check out the premiere of this one.

Marvel's Agents of S.H.E.I.L.D. (Premieres Tuesday, Sept. 24 on ABC) - Despite the severely clunky title, this comic book-derived action drama could be one of the better new shows of the season. Why? It is co-written and co-produced by Buffy mastermind Joss Whedon, who has been having big success with the superhero movies in recent years. Expect lots of wisecracking and fight scenes.

Lucky 7 (Premieres Tuesday, Sept. 24 on ABC) - This one has a premise I can relate to: It deals with the lives of seven convenience store workers after they win a lottery jackpot. It's based on a British show called The Syndicate. Maybe we'll get lucky with this one. I suppose it's a good sign that Stephen Spielberg is listed as a co-producer, along with ER's David Zabel. Then again, it seems like Spielberg's name is on all the shows these days. He's either cloned himself or he's world's biggest workaholic. 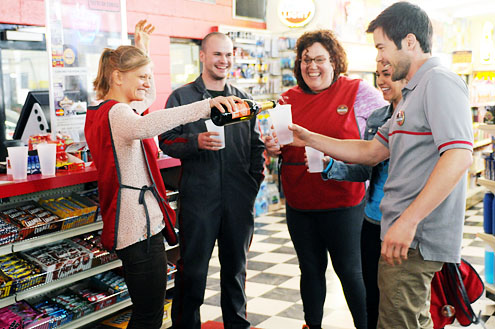 Breakin' out the bubbly on Lucky 7

The Crazy Ones (Premieres Thursday, Sept. 26 on CBS) - Sarah Michelle Gellar has risen from the ashes of the sort-lived Ringer and teamed up with legend Robin Williams in this new Office-style single-camera comedy. I would have preferred to see her in some type of supernatural or sci-fi thing, but I'll take this as a consolation prize. Who knows, it could fly. Gellar's comic sensibilities were part of what made Buffy such a huge hit. This girl desperately needs a second hit show, so maybe the viewers will smile down upon this one. In case you were wondering, this is Robin Williams' first regular TV series role since Mork and Mindy wrapped up back in 1982! Let's hope Robin is as good at picking TV roles as he is at picking movie roles.

Once Upon a Time in Wonderland (Premieres Thursday, Oct. 10 on ABC) - As you might have guessed, this is a spin-off of ABC's excellent fairytale drama Once Upon a Time which focuses on the characters of Alice's Adventures in Wonderland. Alice will have a love interest in this version: a genie named Cyrus. Paul Reubens (aka Pee-wee Herman) was originally cast as the voice of the White Rabbit, but has been replaced by John Lithgow. Alice learned that curiosity can lead you to some really weird places, and hopefully the CGI effects in this live-action drama will do her adventures justice. Strangely, there's no word on who will play the Mad Hatter.

Dracula (Premieres Friday, Oct. 25 on NBC) - NBC has finally clambered onto the vampire bandwagon with this reboot of the well-worn Bram Stoker novel. One good sign: It will be co-written by Daniel Knauf, creator of the critically acclaimed HBO show Carnivàle which aired a few years back (which I haven't actually seen, due to my ongoing lack of access to cable television.)

The 100 (Scheduled to premiere on The CW as a midseason show in 2014) - The CW must have heard my prayers, they are cooking up two new sci-fi shows for us this season. This one is summarized by TV Guide as follows: "Nearly a century after a nuclear war has destroyed civilization, a spaceship sends 100 juvenile delinquents back to Earth to investigate the possibility of re-colonizing." Sounds like fun, right?

The Tomorrow People (Premieres Wednesday, Oct. 9 on The CW) - If you loved Heroes, this could be the antidote for your aching heart. The Tomorrow People, based on a British TV show of the same name, has more than a few parallels to the ill-fated NBC superhero drama. It tells the story of several young mutants from around the world with various supernatural powers, and is written and co-produced by Phil Klemmer, who wrote several episodes of Chuck and Veronica Mars, of all things.