As our Earth continues to whirl around the sun, the only thing you can really count on is that things will change. Day turns to night, clothes go out of style, friends turn into strangers, old buildings are replaced with new ones, and phones become obsolete before you figure out how to use them. It's a harsh state of affairs, and if you went to ask the old wise man on the mountaintop the reason for it, he would probably answer with some mysterious riddle, and you would say thanks and go back home, and then decide what he meant was that change is for your own good, because life would get boring if everything stayed the same. So, I suppose the thing for a person to do would be to somehow learn to enjoy change. Go with the flow. Roll with the punches. All of this is just a roundabout way of saying there have been some new developments in my life which have taken a toll on my blogging output recently.

Yes, I know it's been a while. Not sure how many of you are keeping track of the frequency of my blog posts, but it brings me no pleasure to admit that it's been nine months since new words graced the Crawlspace. "Why, that's shocking," you say. "No self-respecting blogger would post less than once a week." Trust me, I've heard it all before. To keep your audience interested and growing, they say, you have to keep shoveling the new content. To be honest I'm not sure if I was ever a blogger in the first place. Most bloggers don't think much about what they're writing. Their words tend to go straight from their heads to their blog sites, with very little editing in between. I find it impossible to write that way. It takes me a long time to gather my thoughts and assemble them into a form that's entertaining for other people to read.

On top of that, I've had a lot of things to distract from my writing in recent months. For example, after 15 years as a cashier at the Majik Market, I was finally promoted to assistant manager. Last year Nick, the other assistant manager, had to go out of town for one of his chess tournaments, and Rajnish decided to promote me so I could cover Nick's shifts. I was reluctant to accept the position at first, because I knew it would bring longer hours and more responsibility, but I figured what the hell, I'm not getting any younger, and my sometimes-girlfriend Sierra seemed impressed when I told her about it.

My actual job duties have changed very little since my promotion. I'm still mostly just a cashier, but I have to come in a couple of extra days a week to order merchandise and help with the paperwork. My slight upgrade in pay and social status has got me feeling a little more optimistic about my future, and I've been wondering if it might be time to move out of Mom's basement and get my own place. Then again, the rent here is cheap and Mom doesn't seem to mind having me around to help with the yard work and whatnot.

I guess the deciding factor in staying or leaving would be Sierra, who remains the mystery woman in my life. We met at the convenience store a couple of years ago, and have been dating off and on since then, but our relationship status is still anyone's guess. We have had a lot of fun going on dates and watching TV here in the basement. She always seems interested in my life, but I still don't know much about hers. It's always her idea to call or come over. She never answers her phone when I call, and sometimes I don't hear from her for weeks. I don't know where she lives, and when I ask her she just laughs and jokingly says she doesn't know me well enough to tell me that, for all she knows I could be serial killer or something. I went by the restaurant one time where she said she works as hostess and they said they didn't know any Sierra. Then she told me she doesn't work there anymore, because she got a job at a law office somewhere. As you would expect, some of my friends have been saying that she's just using me and that I should stay away from her because she could have five other boyfriends or be a drug addict or a criminal or who knows what. They might have good reason to be thinking those things, but I don't want to believe any of it because she's beautiful and I fall in love with her a little more whenever we're together.

We've had another frequent guest here at Mom's house for the last few months. It turns out that Sierra has an 8-year-old son named Garrett and he's been spending a lot of time here with me when she goes out of town to visit her sister in Pittsburgh or has to work late at the office. Now, as you might have guessed, I've never thought of myself as being good with kids, and might have been freaked out about the situation, but I get along well with Garrett and we've been having lots of fun. Actually, I feel kind of honored that Sierra has trusted me to spend time with her son. Mom likes him too, and has given me lots of moral support. She said that this is a good chance for me to develop my parenting skills.

Normally, when I'm not working, I like to chill out on the couch and watch TV, but that doesn't happen much when Garrett is around. He's always full of energy, and constantly wants to go places and do new and interesting things. We've been to the movies, the amusement park, the racetrack, the planetarium, and a couple of baseball games. We have also logged a lot of time on the video game console. Sierra says she doesn't want him playing anything too violent, but the games in my old Super Nintendo collection are pretty tame compared to today's offerings. I'm guessing he would rather play the latest action-packed Playstation or Xbox games like his friends play, with titles like Morbid Enemy 7: The Reckoning, and War Patriot 2014: Operation Valiant Cougar, but so far he hasn't complained.

Aside from the video games, Garrett doesn't have much interest in TV, except for some of those Toonzai cartoons that come on Saturday morning. When I get engrossed in one of my TV shows, he goes upstairs and hangs out with Mom. He helps her with the dishes and she has taught him several card games. He also plays with our old dog Randy who lives in the backyard. Garrett tries to get him to chase sticks or a frisbee and usually Randy just lays there on the porch and looks at him like he's crazy.

You might have thought I would find out more about Sierra by spending time with her son, but you would be wrong. Whenever I ask him anything about her, he says, "I'm not supposed to tell you that." I have considered the possibility that she's involved with the CIA or black ops or something crazy like that, and that she could even be gathering information about me for some secret mission. I asked Garrett one time, "You know you and your mother are making me paranoid, right?" He just replied, "Don't worry, she likes you a lot." Mom says I should let Sierra have her space and not worry too much about her. So, hearing that from them, I feel better about things. I've got an attractive girlfriend, and it's not the perfect situation, but fairy tales are the only places where problem-free relationships exist.

Well, that's what's been going on with me lately. Here are some thoughts on a couple of TV shows from the 2013-2014 season which is drawing to a close as summer approaches: 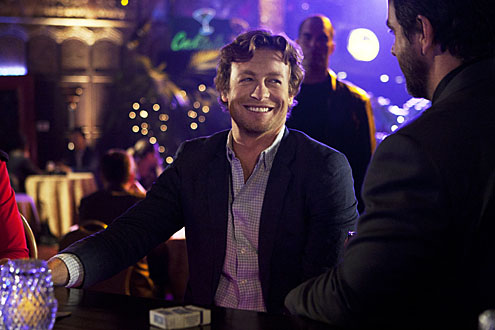 The Mentalist - The sixth season brought the long-awaited end to Patrick Jane's search for Red John, the demented serial killer who claimed the lives of Jane's wife and kids several years ago. Our teacup-wielding hero, without disheveling his hair or rumpling his sport coat, calmly strangled the villain, and then set off for two years of R&R on a Caribbean Island. The end of the Red John saga brought some ambitious changes to the show. After the disbanding of the California Bureau of Investigation and a two-year fast forward, three of the characters, including Jane, Lisbon, and Cho, are working together again as FBI agents, with Rigsby and Van Pelt leaving the show after getting married and starting their own high-tech security service. Yet another big shake-up toward the end of this mother-of-all Mentalist seasons: looks like Patrick and Teresa are finally going to take their long-standing platonic relationship to the next level and give the love thing a try. That should be interesting.

Once Upon a Time in Wonderland - This Once Upon a Time spinoff was the only new show of the season that I got really attached to. It had a totally likable cast and some great romantic sub-plots. In my opinion, it was a lot more engaging than its parent show, due in no small part to the smaller number of characters. Instead of trying to include every fairytale character of all time like its forbearer, OUATIW focused instead on just a handful from the Lewis Carroll books, along with the unlikely inclusion of Jafar from Disney's Aladdin movies. The evil sorcerer, as played by Naveen Andrews of Lost fame, ranks as one of the all-time great TV villains in my opinion. I didn't understand the need to cram the whole name of the parent show into the title. "Wonderland" would have been a lot catchier and easier to say to your friend there at the water cooler or in the coal mine. Sadly, we won't be getting another season of this show. Ted's curse has struck again. It was cancelled by ABC the day after I liked it on Facebook.

Agents of S.H.E.I.L.D. - What to say about producer Joss Whedon's latest incursion into television? It seems a lot more focused than Dollhouse, his previous effort, and having the watchful eyes of Marvel Comics looking over his shoulder has probably also contributed to the quality of the show. This was one of my girlfriend's favorites of the last season. Sierra, like me, is a big Buffy/Angel fan from way back. I watched a couple of episodes of the new show with her, but I have mixed feelings about it. It's hard for me to warm up to this bunch of government secret agents who keep tabs on various super-powered individuals. I can't figure out who the good characters are supposed to be, if there are any. Coulson, the main agent guy, seems hopelessly smug and aloof. You can't just slap a protagonist up there and expect me to like him. You've got to give me reasons to like that person, so that I care about their story. I realize that some of the ambiguity of the SHEILD characters may be intentional, given the questionable nature of their employment. Overall, this is not a bad show at all. In fact, I'm contemplating the first-season DVD as I type this.