Oh. ER's not on anymore?

Time of death? No one's really sure. One of the custodial workers wandered into Exam 3 one night and noticed the aging series had no heartbeat and negligible brian activity. Bag 'em and tag'em. Bomp bomp bomp, another one bites the dust. The final season of the show was nothing more than a formality. Just wrap up some loose ends, bring in some old stars to pay their respects, and let the show live out it's final days with a little bit of dignity. Truth be told, the ER that I knew and loved ended around season six, and its condition continued to worsen until the end.

Here's a brief summary of the show's ongoing medical problems:

The Departure of Dr.Ross and Nurse Hathaway

This marked the beginning of the slow hemorraging of the show's original stars. During the nineties I became a huge fan of the Dr. Ross character. I saw him as a role model -- an enigmatic loner with a bad reputation and a heart of gold, bringing smiles to the faces of terminally ill children, and slightly embarrassed about his heroic tendencies. In my quest for Clooneyhood I even considered entering the medical profession, until I realized that with no medical trianing my opportunities would be limited to emptying bedpans and wheeling gurnies down the hall. I still resent Clooney and his supersized ego for ditching the show so early on. And no, his one episode return in the final season didn't make it better. More like a slap in the face. Too little too late, George.

The Knifing of Med Student Lucy Knight for No Apparent Reason

The super-cutie and potential love interest for Dr. Carter had only been on the show for one season. One of the patients went psycho and left her bleeding body on the exam room floor. The viewers were left to twist in the breeze and wonder eternally about the reason for actress Kellie Martin's impromtu departure. Drug or alcohol problems? Eating disorder? Personal vendetta by a producer? Or maybe she was too grossed out by the surgery scenes to stick around. We'll never know. They should be required by law to explain these things.

This was in spite of having had relationships with men in earlier seasons. Isn't it supposed to be a myth that people suddenly "turn gay"? Apparently the writers didn't get the memo. This was really the end of the show for me. I always had a thing for Dr. Weaver, crutch and all (played by the lusty Laura Innes). She made my reclusive nerd heart go thumpity thump. When she switched teams, it turned my world upside down.

Sure, Kovac was a hit with his 007 looks and European accent, but let's face it -- the guy had the personality of a can opener. He seemed permanently stuck in serious mode, and the occasional sight of his unnatural smile was reminiscent of a jack-o-lantern. Put the Croatian cutout together with self-absorbed everywoman Abby Lockhart and you get a romance that, well, kind of sits there like the old stump in grandma's back yard. 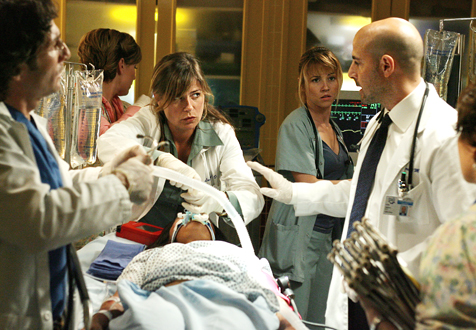 The Death of Romano

Arrogant, trash talking Dr. Romano was one of TV's all time great villians. As satisfying as it was to see the belligerent MD pulvarized by a falling helicopter, the show lacked direction after his departure. For a while the ethically challanged buffoon Dr. Morris seemed destined to become Romano's replacement as the resident bad guy, but instead was utilized as the badly needed comedy relief for the aging show.

The ever revolving door of new characters failed to restore the show to its former greatness, and the newcomers where decidedly less heroic than their predecessors. Jing-Mei, Gallant, Neela, Ray, and nurse Samantha all seemed more concerned with their own dull lives than with their patients. An exception for me was Dr. Pratt, who recalled the gritty sincerity of Clooney's character, although with more of an inner city than bedside manner.

The Episode with the Chimp

In which Dr. Ray Barnett brought an ailing chimp into the ER to be tended to by the staff. Dr. Abby Lockhart and the nurses became attached to the furry fellow and objected when Ray attempted to take the patient away again. Abby told him, "You're the one who started all this monkey business!" That's when I turned off my TV and rarely ventured back into County General again.

We can all be thankful that the suffering is finally over, and the show has gone to a better place (DVD). No need for tears, 15 is a ripe old age for a TV show. Rest in peace, ER. You will be missed, although not enough to bring you back again.