Supergirl to the Rescue

Hello out there and a big thank you to anybody who is still reading this blog. As usual, it has been a really long time since my last post, and I would apologize for that but, really, who cares at this point? You could say I've been recovering from a year-long case of the blahs, brought on by a combination of television apathy and writer's block. Of course, I realize that I disclosed way too much about my personal life in the last post, which probably played a role in my ex-sometimes-girlfriend Sierra's decision to relegate me to the romantic clearance bin. That's right, we're pretty much history now. After I tracked her down at a ritzy party last year, she made it clear that I was one step away from a restraining order. She loves me but she's not "in love" with me. It's not me, it's her. You know the routine. She needs space, so I'm going to give her several galaxies of it. I never could figure out what she was up to and why she was so secretive all the time, and I don't really care anymore whether she's a CIA agent or just a crazy woman with honesty issues. I still love her but it's probably best for my own sanity that we're not together. C'est la vie.

The upside to all of that drama is that I once again have unlimited me-time when I'm not working at the convenience store or doing chores for Mom around the house. In the last year I've been watching a lot of old shows on DVD (mostly Ghost Hunters and The Mentalist) and reading a few books, but I haven't felt like blogging again until recently, not just because of Sierra, but also due to the fact that there hasn't been much new to watch that's worth a damn, as far as broadcast TV goes. In my opinion, we've been in sort of a TV nether-zone for a while now, consisting mostly of crime dramas, superhero shows, and a few stubborn old reality TV shows that will probably be around forever like the cockroaches. Oh yes, and we mustn't forget those charming flesh-eating zombie shows and the zombies that watch them (apparently half of the US population). 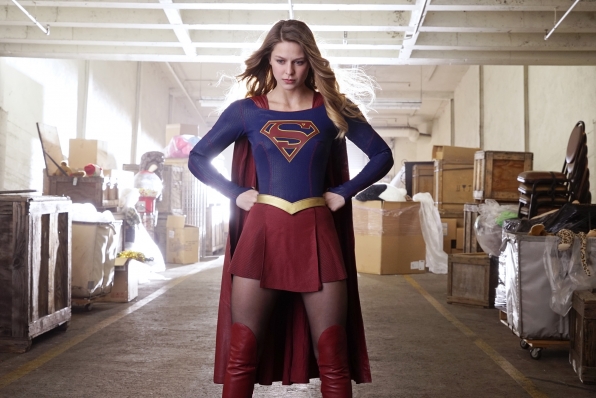 I was finally rescued from my state of TV apathy by a caped red and blue female known as Supergirl, who flew into my basement dwelling in the fall of last year and lifted my spirits with a light-hearted superhero drama that doesn't take itself too seriously. Lead actress Melissa Benoist is super-adorable as Kara Zor-El (aka Kara Danvers), cousin of Superman, who battles an assortment of cheesy super-villains and mean aliens, and still finds time to fetch coffee and bagels for her bitchy boss Cat Grant (played with impressive cold-heartedness by Calista Flockhart of Ally McBeal fame). Rounding out the cast is Winslow "Winn" Schott, her nerdy co-worker seeking an upgrade from friend status (Why does that seem familiar?), a tall, dark version of Jimmy Olsen, a secret agent sister, and Hank, the shape-shifting Martian. It all adds up to moderate levels of viewing enjoyment. Of course, superhero reboots have been the big trend in television and movies for the last several years, maybe the only trend. Why? Who Knows. People in general, I suppose, are feeling helpless with all the talk about terror and climate concerns and mystery diseases and a jittery economy, and would love to have some super-powered people in tights around who can make everything right. I'm no exception to this sentiment and so I don't mind being rescued by Supergirl every week. Maybe not the greatest show of all time, but an improvement over most of the other superhero dramas that have infested TV screens in recent years. Score one more for CBS. They are slow, but they do occasionally get it right.

Another recent win for CBS was their choice of Stephen Colbert to take over The Late Show after the departure of iconic funnyman David Letterman. When I was promoted to assistant manager at Majik Market a couple of years ago I started working regular day shifts instead of the overnight shift, and as a result I am now able to watch shows at night like a normal person instead of trying to remember to tape them on my VCR and watching them in the afternoon. I was a fan of Jay Leno, but rarely got to watch The Tonight Show on NBC before Leno was unceremoniously booted in favor of Jimmy Fallon. Jimmy is a talented enough guy, and I respect the fact that he has achieved so much in his career since leaving Saturday Night Live all those years ago, but his version of The Tonight Show just doesn't do much for me. Stephen Colbert's edgy, politically tinged humor on The Late Show is like a breath of fresh air, and a bold move for an old broadcast network like CBS. As with other late shows, I usually just watch the funny stuff in the first half and skip the celebrity interviews. To Colbert's credit, his guests seem to include more people who aren't movie stars - politicians, writers, musicians, and so forth. The show has been doing OK in the ratings, hovering around second place behind Fallon. I'm sincerely hoping the network keeps Colbert around for a while. As far as I can remember, the last late night talk show with this much brainpower was The Dennis Miller Show back in the early 90s, which lasted all of seven months.